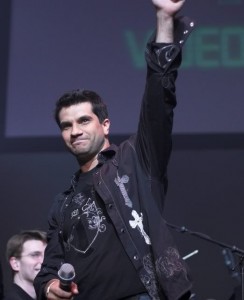 If you haven’t heard of Tommy Tallarico or Video Games Live and you’re any kind of a video game fan, you’re missing out.

Well, he’s been at it for the better part of a decade now, and Video Games Live is now doing dozens and dozens of shows each year all over the world. The beauty of it is that Video Games Live has even taken over the Internet, broadcasting their latest show live from El Dorado, Arkansas on TwitchTV!

Tommy also likes to give little hints for upcoming shows that he shouldn’t but does anyway. The things we picked up on from his quick chat are:

We’ll certainly be checking out Video Games Live as it rolls through Toronto in October, but even before that, when we roll into Los Angeles for E3 2012! Stay tuned!