Sony tips its hat with everything except what it’s actually planning to show off in Los Angeles this year.

We already know the showtimes for the big three press conferences at E3 this year, but what we didn’t know was anything specific about timing, floor layouts, and design of the booths. Well, look no further as Sony has unveiled their official E3 website, and it includes all of the above, and then some.

First up is the timeline of their press conference. Sony notes that their presser is to start at 5:30 with the pre-show, 6:00 for the actual presentation, and will have a wrap-up immediately following it. Notice that the wrap-up isn’t given a specific time. Last year, the Sony experience lasted about five hours if you stayed through the full event, and that didn’t count the food and drink reception beforehand. This year, it sounds like we can expect something similar as Sony is holding the actual conference times close to the chest. 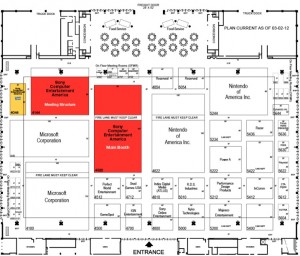 Next up is probably the most interesting thing of all: the floor plan of the show floor. Traditionally, Sony and Nintendo have shared a hall alongside other smaller companies and publishers, but it looks like this year, Microsoft will be joining them. Could it be that EA is expanding its massive presence to even bigger proportions? Or are we supposed to think that this is a final diagram when it is all conjecture? We’re not thinking it’s conjecture at all, given the addition of actual booth numbers and a number of smaller companies, but it looks like Sony’s space is quite small compared to Nintendo’s and Microsoft’s spaces. Could this be a sign that there isn’t really that much to show off?

Then again, Sony is touting more than 200 playable kiosks and over 72 hours of gameplay. The first number makes sense, but given that the show floor is only actually open for 19 hours over the length of the three day show, we’re not sure where the extra time is coming from. Last year at E3, Sony had a massive party directly following their press conference where they allowed people to get up close and personal with the PlayStation Vita and some other PlayStation 3 games. Is there going to be a 24-hour hub over the course of the three days for people to get their Sony gameplay fix? Will it be open to people outside of E3 expo and held off the convention centre grounds?

Odds are is that Sony is just counting each day as a full 24 hours and none of this will actually happen, but it would be interesting to see it come to fruition. It could certainly give Sony an edge if they give people not allowed to attend E3 (those outside the industry) a chance to play the latest games before they’re released.

This is all we can really glean from Sony’s E3 website so far, but there’s more information than we’re used to getting. Given massive companies’ propensity to leak information minutes before their showtime, whether intentional or not, you might think that Sony would be keeping all these details under wraps as long as possible. Then again, the hype machine is building for Sony faster than any other company so far, so let’s see how strong they keep the momentum going as we get closer and closer to E3 2012.

Make sure to check out Sony’s awesome countdown to E3 2012 by clicking on the (non-animated and therefore incorrect) image below: