With a portable gaming system with almost as much power as a console, the PlayStation Vita has a lot going for it. But the other piece of the puzzle is starting to come into play: console-quality games are coming to the platform, and we wonder if Rockstar won’t pull a rabbit out of it’s hat at E3 and announce that Grand Theft Auto V will in fact be released on the PlayStation Vita as well.

See, we’d normally think that a console port wouldn’t happen. There are just too many things to consider. Things like controls, not to mention the size of GTA‘s massive game world on a tiny memory card, as well as other factors like multiplayer all need to be taken into account.

But we’ve come farther than that, now. We’ve got Sony’s CrossPlay to play what is virtually the exact same game on a console and a portable at the same time. We’ve even got cloud game saves to make sure that the game picks up exactly where you left off, no matter if you last left it from the couch, or put the Vita on your bedside table.

The controls on the Vita are nearly exactly that of a PS3 DualShock controller: dual analog sticks, the same face buttons, and a directional pad. In fact, the only thing the portable is missing is the dual shoulder buttons. But surely they can make up for that with the front and rear touch pads, cameras, and gyro, right? We think so.

So what does this mean for GTA? For one thing, it means we could have a portable Vita version of the game day-and-date with the full-fledged console release. Actually, we shouldn’t even say “full-fledged”, because that signifies that the portable version would be inferior to the console one. But with the technology that Sony has shown us, GTA V on their PlayStation Vita might be just the ticket to boost game sales and blow everyone away. A game of that magnitude in your pocket? Impress us, Rockstar. Impress us.

It has also come to our attention that Grand Theft Auto, while arguably their largest franchise, is certainly not Rockstar’s only franchise. If we see a massive game like GTA V (or even GTA IV, for that matter), what’s to stop Rockstar from releasing games like Red Dead Redemption or Max Payne on Sony’s handheld? Well, nothing. Hmm. E3 can’t come fast enough.

We spied this shot of similar conjecture in Play Magazine out of the UK. Take a look and read through it for yourself – it’s got some interesting tidbits about the portable history of the Grand Theft Auto series. 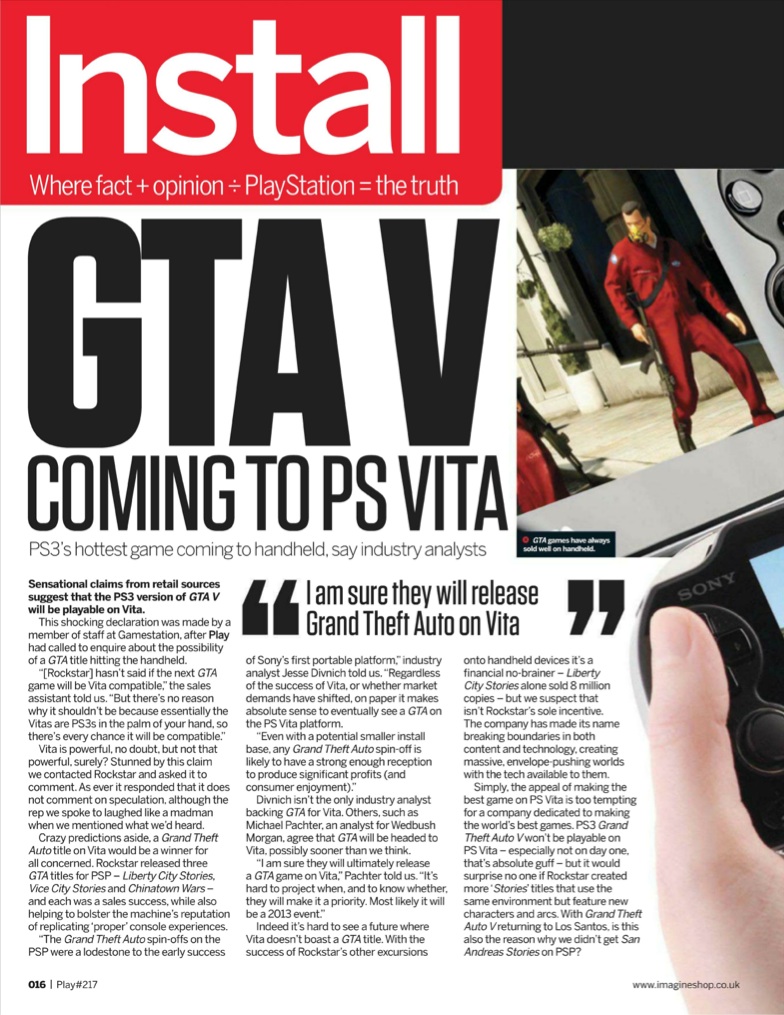