The Hyper-Speed Shoot-Out In Space

If you’ve never heard of Phalanx, you’ll probably know it by its cover.  Featuring an old man and his banjo, this game has been featured on too many “Top Weirdest Game Cover Art” lists to count.  Can you blame it though? Whoever designed the cover clearly wanted to grab people’s attention, and did a great job of doing it. However behind the bizarre exterior, Phalanx is a solid side-scrolling space shooter in the same vain as Gradius or R-Type. Here, you pilot the A-144 Type-R Phalanx spacecraft on a suicide mission to defeat the evil Delia empire. Compared to the cover art Phalanx is pretty generic in transition, but thanks to some cool key features and attention to detail it’s simply too good to pass up.

Phalanx consists of eight stages each decked out with several enemy fighters, obstacles, minibosses and bosses along the way.  I swear, sometimes you wonder how many hits these bosses need – they take forever to defeat!  Luckily each stage has plenty of power-ups (ten kinds in total) including your typical fair: a beam laser, homing missile, bombs, attack droids, power capsule, energy cannons and four power levels for each of these weapons. Up to three weapons can be stored, which you can switch between on the fly.  You can even sacrifice a weapon for a “smart bomb” effect freeing up another slot during those tense moments. These power-ups are all useful so don’t ever refrain from taking one! 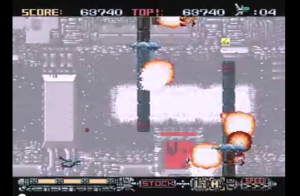 As you play the game you’ll need to know which weapons work best depending on the situation.  I’ve had a few runs where I’d taken disastrous hits just because I wasn’t firing off the right weapon so take the time to learn your environments.  It doesn’t necessarily make the game any easier in the long run, but certainly more manageable.

This is one of those games that can be a little overwhelming to the eyes.  It features various environments all rich with depth, and while the colour scheme is a bit muted it compliments the game’s atmosphere.  I can’t say Phalanx’s sense of depth is a fault necessarily, but it’s certainly a disorienting one, especially when you’re first starting the game.  Focusing on tiny ships shooting dimly lit bullets is tougher than it looks so prepare to have some close calls the first few times — luckily your ship can take three hits compared to just one.  Later stages become even more dynamic, forcing you to weave bullets and ships while also avoiding moving barriers along the way.  This can get downright annoying, but never enough to be irritating.  While still not nearly as difficult as R-Type, Phalanx can be a tough customer.  Just keep replaying and memorize those attack patterns! 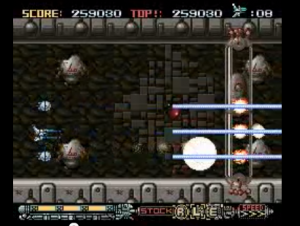 One of the coolest features Phalanx has to offer is its speed system, which allows you to switch between three different speed levels at any time.  This is very useful if you’re trying to speed up and bypass enemies and obstacles or slow down and carefully weave past a string of bullets.  This gives the game a greater sense of control, making maneuvering around each environment much more entertaining.

If there’s one last feature I’d hate to miss it’s the game’s music.  Phalanx has already proven that a little bit of visual attention can go a long way, so the fact that it also features plenty of memorable, atmospheric music is like icing on the cake.

Phalanx may not be groundbreaking, but it has plenty of replay value.  Whether we’re talking about the game’s rich environments, speed system, atmospheric music or its many power-ups, Phalanx had a lot to offer for its time.  This game also doesn’t skimp on difficulty, keeping things interesting, frustrating but always entertaining.  Phalanx may have been overshadowed by other shooters during its time, but it’s a mainstay in the genre. 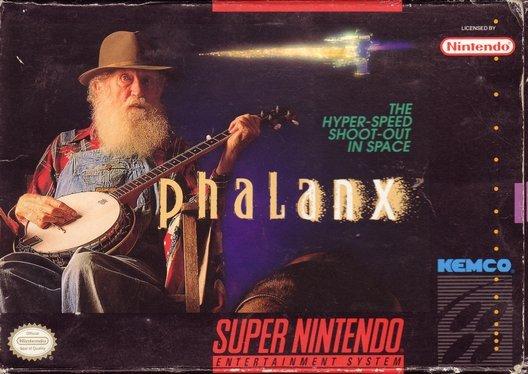