With Apple having officially announced the event at which they will presumably unveil the iPhone 5, we thought it time to break down some of the rumours we’ve heard about Apple’s latest device and weigh in with our own thoughts.

The design that has been floating around has an aluminum back, bookended by iPhone 4-like glass panels. While Apple is clearly obsessed with aluminum and glass, the design of the latest device somehow doesn’t seem, well, Apple enough. Jony Ive, the Cupertino company’s lead designer continues to refine and refine until the many parts can be whittled down to the few. The addition of a different material for the back plate of the steers completely contrary to this mantra and doesn’t really jive with the simplification in design of iPhones in the past few years.

The part of the design that does actually make sense is the slightly larger screen that has been rumoured. There are a few different thoughts on this one. First, Apple needs to make sure that software scales appropriately for the added height, especially considering the width is likely to remain the same. The pixel count could go up for both axes, but that would be unlikely given the already high pixel count of the current generation iPhone, as well as the fact that it would require developers to multiply by an odd number to up-res their apps.

The new dock connector is a rumour that we’re entirely sure will pan out. With Apple pushing its new nano-sim card variant to save every molecule of space on the inside of its devices, it only makes sense that it would reduce the size of its now-behemoth dock connector to something a little more manageable. And in true Apple style, the connector being double sided so it works in any direction is just simple genius in a way only Apple could be.

We all know about iOS 6 since it was unveiled at WWDC this past June. The main features of iOS 6 aren’t exactly secret anymore. Passbook, the lack of YouTube, and of course, Apple’s own mapping solution are the big draws here, but we’ve got a feeling whatever new iPhone hardware Apple unveils will require a new gem in the company’s latest operating system.

Beyond what we know about the hardware and software, it is hard to imagine what sort of surprises Apple has in store. There are the realistic conjectures such as NFC (near field communication) being built in to the handset, as well as the more wishful ideas like a custom-designed light-field camera using technology one finds in the Lytro camera. To be honest, we have a feeling we’ll be disappointed by the announcement next week, but still expect to see something that blows us away.

Overall, Apple is one of those companies that manage to surprise – in a good way or otherwise – at almost every event they host. Of course, we’re not entirely sure what level of surprise we’ll get this time around given that we’ve had so many leaks in the past few weeks, but we’ll be holding out for something special out of Cupertino. 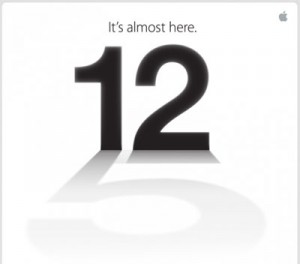 The only other big thing up in the air about the new iPhone is its name. Right now, iPhone 5 seems most obvious given the design of Apple’s invitation, but Apple enthusiasts know that this is actually the iPhone 6 if you’re following along chronologically. Given that, if Apple does indeed decide to call it the iPhone 5, it could signal that iPhone 4S was just a stepping stone between the fourth and (true) fifth generation iPhone. What would that mean for the future iPhone nomenclature? Would the iPhone 5S not be worth buying? We’re probably getting ahead of ourselves, but the point needs to be discussed from now.

Either way, make sure you follow along to Apple’s latest; the event happens live at 1PM EST on Wednesday, September 12th right here on Eggplante!