It seems that this year has been very collection-heavy for PlayStation, and it doesn’t look like things will be slowing down anytime soon for Sony.

Of course, this isn’t a bad thing, as there are plenty of massive titles heading to PlayStation in the next year or so, but we won’t see those titles – games like The Last of Us or Beyond: Two Souls – until 2013. In the meantime, Sony has seen fit to release tons of collections of previous titles in their lineup to make sure gamers have tons of content for their Blu-Ray playing gaming machine.

This summer, we were treated not only to a Ratchet & Clank collection, but also a swarm of others, including Infamous, God of War, and Journey. Those are all pretty incredible titles, and if you don’t have them (all) in your collection, you really ought to pick up what you need to complete the collection. By our count, you end up with about ten titles for a hundred bucks, and as far as we’re concerned, they’re all damn near-triple-A games.

Sony is continuing the trend of collections, releasing a couple of packs in the next few months. Released a few days ago was the Angry Birds Trilogy which, while not a massive title, is also a massive title. If that makes any sense. 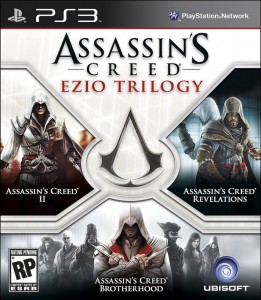 For those keeping track, that date (November 13th) is precisely two weeks after the release of Ubisoft’s latest entry in the franchise, Assassin’s Creed III. This is a brilliant move as far as we’re concerned, because PlayStation 3 owners that finish ACIII and feel like dipping into some nostalgia with the rest of the series is the ideal audience to pick up the new Ezio Trilogy. And Ubisoft knows it.

Of course, PlayStation also has some pretty big titles heading to the platform this year as well, and we’ll have plenty more to report from Sony’s Holiday Preview Event taking place next week. We’ll be there to report on all the big news and take you through Sony’s console and portable lineup for the holidays!