LittleBigPlanet is back in a whole new – yet somehow, the same – way on PlayStation Vita. With the latest iteration of the franchise, we see classic environments and our beloved Sackboy once again in precarious situations and impressive story arcs, but with entirely new gameplay mechanics. 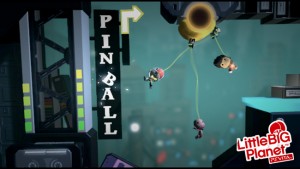 There isn’t much to say about this game. On the Vita’s small screen, LittleBigPlanet looks almost as good as the high definition version you’ve played on your PlayStation 3. But where the Vita version really charms the pants off of any game before it is in the control schemes. And boy are there a million of them, so we better get started.

You can play LittleBigPlanet with the traditional controls (square, circle, triangle, and X buttons, alongside the analog sticks), but you’ll quickly run into insolvable puzzles if you rely on buttons alone. Some things need to be moved by dragging on the touchscreen, others need to be unpressed by tapping on the rear touch panel, and others still will only move if you tilt the device to force gravity to do its thing. And these controls are really where the game shines. At the beginning, we were given a brief explanation of controls with a sample level and after just a few moments, we felt like we had been playing the game with these new controls all along.

And that is, at its core, what every developer should strive for: familiarity. Not using the same stories or characters all the time, or rehashing existing ones, but creating familiar experiences that make the player somehow feel at home. We’ve played through a bunch of iterations of LittleBigPlanet, and with this, while it is largely the same experience, it is so different than what we’re used to because we just feel so much more involved in crafting the world.

This franchise wouldn’t be nearly half of what it is without the insane cuteness it brings along with it, and that goes for everything from the audio, to the creation tools, to the collectable items in the game. Sackboy is constantly finding new items and stickers and things to make his world that much more bizarre, and with the Vita version of the game, we’re given even more tools to create these types of experiences. At once point, we created a leopard-print clock with an observation deck on top of it, and then proceeded to drive it through a level. No, we didn’t say the creations had to make sense, but that is the beauty of this game: play, create, and share in your own world, or one you create. That choice is up to you.

LittleBigPlanet does have a few faults, and some of them are inherent with the Vita hardware more than the game itself, but they’re issues worth noting. On the gaming side of things, it does feel a tad short and it almost seems like Sony is relying on the user-created levels to pick up the slack in sheer volume of levels available. With that said, there are already a veritable ton of levels for download, many of which are a lot of fun, so perhaps this is less of an issue than we’re making it out to seem.

On the hardware side of things, the touch controls on the front of the Vita need a ton of polish. Again, this could be the hardware itself, but it seems as if the design of the game could have at least helped in some aspects. Tapping and dragging often becomes a chore while other times, it just doesn’t work without a few tries. We’ve been spoiled by the iOS devices that have incredibly fluid touch screens and perfect responsiveness, and the Vita just doesn’t deliver. With that said, we didn’t have nearly as many problems with Uncharted: Golden Abyss, which, being a launch title, we’d expect to have more issues.

We’re nitpicking now, and that’s because there just isn’t much negative to say about LittleBigPlanet on the Vita. It is a game you’ve played before, but it is a stunner of a game at that because Sony has somehow managed to take everything they put on the original title’s blu-ray disc and shove it onto a tiny cartridge for portable consumption.

If you own a Vita, you should own LittleBigPlanet for it as well, because this game is a true gem on any platform.