A few months ago, I wouldn’t be able to tell you much about The Guardian Legend.  Me and my boyfriend spend a lot of time looking for new and interesting retro games to pick up but this was never one of them.  Thinking back, it seems a little ridiculous how little is actually said about this game considering its genre-bending appeal, high-flying action and deep exploration.  I’ll admit, my experience with this game wasn’t always fun, but with enough time and patience I grew to appreciate this hidden gem more and more.

The Guardian Legend puts you in the role of the guardian of Earth, a female aerobat name Miria tasked with infiltrating Naju, a planet-like mass hurtling towards Earth.  The game is divided into two unique sections: the Labyrinth and the Dungeon (or Corridors).  The Labyrinth is a Zelda-style top-down dungeon crawler full of evil aliens, weapon upgrades, portal gates, save points and mini-bosses — not to mention the Metroid-esque map.  The Dungeon, on the other hand, is a vertical shoot ’em up full of health and weapon capsules, upgrades, increasingly bizarre elemental enemies and your usual giant boss.

At first, I didn’t really know what to think of the game.  I absolutely loved how genre-bending it was — there just aren’t enough quite like it, especially for the time.  While I’d like to say the game is groundbreaking because of that feature, the overall experience was sometimes a little underwhelming in presentation, as though the game was having a total identity crisis, and took some getting used to.  Once I became more acquainted with the map and what each gate and upgrade symbol stood for my experience starting moving in a totally new direction though, and I started appreciating the game for its unconventional, yet all-too-familiar gameplay.

It’s hard to say what section of the game is better, since they’re so completely different from one another.  I’m a huge fan of shmups so the fact that The Guardian Legend implemented these parts in the game really made it worthwhile for me, no matter how annoying it would sometimes be.  Weaving has always been one of those tactics I’ve worked hard to perfect in the genre, but here your screen becomes so saturated with enemies and shots that it’s near to impossible to dodge all of them unless you’ve spent enough time memorizing the different enemy patterns and weapon upgrades.  To top it off, weapons deplete both weapon and chip power, each of which can only be restored using weapon capsules.  Those capsules, in addition to health capsules, are an important necessity, but you won’t always get what you need so luck has a lot to do with whether or not you’ll make it past each stage.  The fact that the experience relies so heavily on those capsules is a total pain, but grows on you as you familiarize yourself with your surroundings.

There’s a lot less luck involved in the Labyrinth, which serves as more of an action-exploration experience where you need (it’s actually optional but I wouldn’t recommend blazing through the game unless you really know what you’re doing) to find as many weapon upgrades before progressing through each alternating shmup stage.  These upgrades definitely puts you at an advantage as you progress the game, not to mention the exploration gets you acquainted with the maze-like maps if you ever need to backtrack.

Difficulty-wise, The Guardian Legend can sometimes be a mixed bag.  Most of the game’s mini-bosses, which you find throughout the Labyrinth stages, are usually extremely easy to defeat.  The main bosses, which you find at the end of every Dungeon stage, can range from easy to excruciatingly hard depending upon how lucky you were finding capsules earlier through the stage.  Sometimes it’s more about outlasting your enemy than outmaneuvering them.

The Guardian Legend‘s graphics are some of the most impressive for its time, with plenty of colourfully futuristic environments.  It sets the mood perfectly, especially the Dungeon stages which cover a whole spectrum of elements.  Since these stages can become so saturated, the game does start slowing down if too much is on the screen, but for the most part it works fine. There are also some really weird parts riddled throughout the Labyrinth, including rooms with giant dialogue boxes (computer screens, I’m guessing?) that you can freely walk over. And don’t even get me started on my endless trek looking for the save rooms — or the giant password codes, for that matter, that’s a completely different issue altogether. The Labyrinth design definitely isn’t one of my favourite features of the game, but it’s something different to explore. 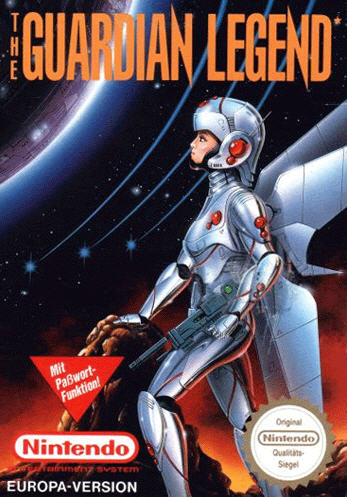 The music is another feature worth checking out, even if it’s not the most impressive.  There’s a lot more memorable retro game soundtracks out there, but this is another one of those that sets the mood perfectly.

The Guardian Legend is much more than meets the eye.  This is one of those genre-bending games that’s heavily influenced by others during its time, but still created something fresh. The alternating Dungeons and Labyrinth’s can be a little on the repetitive side, but graphically it tries to keep things new and interesting. Yet no matter how intriguing the experience is, it’s still riddled with design and gameplay problems, and relies heavily on trial and error — luckily, you get to keep all of your upgrades even if you die.   The Guardian Legend is never as groundbreaking as it could have potentially been at the time, a shame considering how immersive the experience truly is, but it’s a worthwhile one if you’re looking for a hybrid of old favourites like Zelda, Metroid, Blaster Master and Zanac, while managing to create its own unique presence.