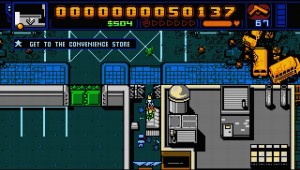 We first spied Retro City Rampage at Sony’s Spring Preview Event in Toronto in May. Needless to say, we were more than impressed by the game’s incredible graphical style, witty sense of humour, and frankly, our sheer surprise that we’d never heard of it before then. The game is available on Steam, PlayStation 3 and PlayStation Vita (both via the PlayStation Network), WiiWare, and Xbox LIVE Arcade. We tested the Vita version which is probably the best of the bunch considering the Vita’s incredible OLED screen. More on that later.

Fast forward to October when we actually got our hands on Retro City Rampage and we’re still taken aback by just how witty and unique the game is, even if we weren’t all that enthused about the entire package.

The game starts off with homages right off the bat. Pokémon, The Dark Knight, and Grand Theft Auto (obviously) all play a role in the game. A bus rams through a bank while the “Jester” kills one of five henchmen in the heist you’re a part of. You’re then taken outside to a series of hundreds of school buses where you have to get across the road Frogger-style and hit the crosswalk button. This was a genius way to start a game and it literally had us laughing out loud, jaws dropped in amazement that a developer could go from one massive homage to another, decades apart, and make a remarkable joke out of it.

The graphics are probably not something you’re used to seeing on a console as advanced as the Vita. But with Sony’s beautiful OLED technology, blacks are really black, and developer Vblank Entertainment have taken advantage of it with vignette scenes that open certain missions and story points. It’s like you’re looking through an old-time detective’s office window as you get a quick plot line explained and hop right back into gameplay.

There are a ton of ingenious game design references spread throughout Retro City Rampage. The biggest one that comes to mind is probably the simplest and the most clever. Given the game’s intentionally pixelated design, rather than displaying your character’s waypoint in metres or miles, it is displayed in pixels. It’s really cute and lends extremely well to the overall fun atmosphere created by the game.

Retro City Rampage is clearly a game developed by a group of very talented people. Yet it feels like it could have theoretically been designed by one person with a love for pixels and Grand Theft Auto. Of course, most of the game comes from Brian Provinciano, who on the Retro City Rampage blog is listed as the number one Canadian Video Game Developer by none other than Brian Provinciano. It’s great to see that the humour and satire of the game extends to the company’s blog as well.

The audio in the game is spectacular, harkening back to the midi audio of Pokemon and Zelda days of the early-nineties. There are over two and a half hours of audio in the game which means you shouldn’t really need to listen to the same tracks over and over again as you play through the game.

Now, with all this praise, there needs to be a bit of a caveat to the potential buyer of Retro City Rampage. The game has incredible homages (For those curious as to what some of the references are, check out GamesRadar’s look at 21 of the game’s coolest pop culture references), audio is fantastically retro, and the game is put together with a lot of heart and character. But the gameplay just isn’t as incredible as the rest of the presentation of the game.

If you’re anything like us, you’ll spend about 75% of your time in the game running over people on the sidewalk to see how long of a chain of deaths you can string together. But for some reason that we can’t quite put our finger on, the game is remarkably difficult to play. Not because the game is actually difficult or the controls are cumbersome, but rather because our feeling when we weren’t playing the game was so “meh”. There’s really no other way to describe it.

And it’s a shame really. Retro City Rampage is a total oddball in the gaming space. It’s a game worthy of a big screen or your Vita, could be a full retail or downloadable title – it’s only $15, by the way – and has a ton of presentation character that should make it incredible. But it isn’t. The gameplay undoubtedly wears the game down to the point that the only real point to playing it is to see what parodies the developer’s have crammed into it. Of course, for that fifteen bucks, it’s really hard to argue with a game that lets you walk through part of the Saved By The Bell set.

It’s very clear that Vblank had an incredible time crafting this adventure and putting everything together. Where most games have a half dozen or so easter eggs, Provinciano has made it his goal to make an entire game around them with the game itself being one. If you’re a child of the 80s and 90s, Retro City Rampage is a worthwhile look back into your childhood of gaming and pop culture. With that said, if you’re younger than Justin Bieber, a lot of this game will be lost on you.