I’ve always been a fan of point-and-click games or text adventures.  They’re genres I’ve grown to admire over the years because of their compelling narratives, intricate environments and attention to detail.  I’ve definitely had my fair share of frustrating moments playing these games, but  none quite as frustrating as Shadowgate.   I’ll never forget the feeling of stepping into Castle Shadowgate, and staring stupidly at my television screen, wondering what to do next.  That moment of powerlessness gets me every time, and is something I’m sure anyone who’s played the game will have engraved in their mind.

As the last living member of a line of warrior kings, it is your job to infiltrate the Castle Shadowgate and stop the evil Warlock Lord from unleashing the dreaded Behemoth upon the world. Aside from that, there’s not much more story, rather, it’s the environments themselves that do the storytelling.

By examining objects or triggering switches you gain a little bit of insight into the game’s setting and become better acquainted with the world around you even if you can’t experience it for yourself.  Instead, you get to experience all the twists and turns the castle has to offer, with a variety of rooms full of angry monsters and cryptic puzzles.

Despite the lack of action, there’s always a constant sense of danger.  Make one wrong move and it’s game over; luckily Shadowgate has one of the best “Game Over” screens to date so even if you do make that fatal move, it’s totally worth it. As though deathtraps and nasty monsters weren’t bad enough, once you run out of torches, there are a limited number available in the game, that’s it.  You have to be quick-witted to get some of these puzzles before your torches go out, so pay careful attention to the many clues scattered throughout the castle. 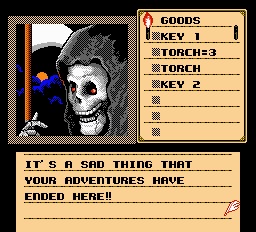 Sometimes, even those clues won’t help you though, and you’ll have to resort to some very tedious trial and error.  You’ll have to use every ounce of your creativity to get through this game and even then it’s more than likely you’ll make countless fatal moves.  I’d be lying if I said I didn’t cheat a little during my playthrough, and when I did I still couldn’t figure out how anyone would be able to figure out some of those puzzles with whits alone.  Shadowgate is downright unfair sometimes, but that’s part of the appeal.

I like it when a game can own me like this one does.  Sure, it’s frustrating as hell and not always fun to play, but even after taking a break I couldn’t help but wonder what dangers awaited me.  The fact that a game can make me feel that way is nothing short of amazing (I’m usually the one who throws embarrassing temper tantrums).  Shadowgate may not have the narrative, but it doesn’t really need it.  Sometimes subtleties are far more affective than any elaborate story can offer.  If you love classic adventure games and are looking for another fine example in the genre, Shadowgate is a must-play.