Apple just released their latest iPad, the mini, this week. With yet another hit product on its hands in a bunch of varieties, is the new iPad mini actually the best portable gaming device on the market? We think so, and here’s why.

Arguably the most important thing about the iPad mini is the game collection it has.

Variety is the spice of life, and in this case, also a main reason to buy into the mini philosophy. You have this thing called the App Store, you see, and, well, who are we kidding; of course you know about the App Store. Apple’s store is on its way to reaching a million apps on the store, and they’ve sold well over 35,000,000,000 apps. Yes, that’s billion.

Why is that good for gamers? Well, 16 out of the top 24 apps on the store are games. Assuming an equal conversion is spread over the rest of the store, and we’re looking at roughly half a million games on the store. Sure, not every one is going to be Angry Birds, but with 500,000 games (and more being added everyday), there is literally something for everyone in Luxembourg. No seriously, Luxembourg’s population is barely over half a million people.

Then there’s the hardware. Having played around with one in the flesh, we can say this: the screen is not a retina display, and that is the only reason we didn’t buy one. Even still, that isn’t a good enough reason to not have an iPad mini for most people. We’re not exactly normal, craving the highest pixel density possible when we buy a device. With that said, though, the fact that it isn’t a retina display means that there is less processing power needed to give you stellar visuals, and stellar visuals is still what you get with the iPad mini. You can see pixels, sure, but that won’t matter much when you’re knee deep in bad guys in NOVA 3.

Of course, probably more than pixel density in this case is the actual size of the screen. iPad mini can be held in one hand, but in portrait mode, the screen is nothing short of phenomenal. You get a beautiful widescreen display – not 16:9 aspect ratio, mind you – and the ability to view a ton of detail. A screen this large also gives you plenty of space for touch screen controls, and since your hands cover up the larger bezels on top and bottom (left and right in landscape orientation), the super thin bezel you do see makes the screen look that much bigger.

The pricing of Apple’s newest mini device is also comparable to that of Sony’s PlayStation Vita when you factor in the larger screen, higher memory, and exponentially more features. iPads will likely never be bought entirely for their gaming chops, and maybe that’s what iPod touch is for, but for those that still see gaming as a major reason to buy, they won’t be disappointed. 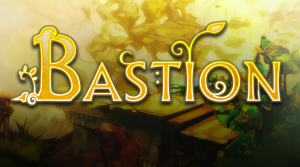 It's hard to argue with incredible titles like Bastion on iPad.

Pricing of games, however, is another story altogether. If you think the entry point of the hardware is high, consider that games will probably run you on average about 80-90% less than games on a Vita of 3DS. You also won’t need to buy any memory cards or carry around any extra cartridges when you buy games on the iPad, although Sony and Nintendo are turning to online game stores as well. Of the current top 25 paid iPad games on the App Store, twenty are under $5. The ones that are over have names like Borderlands and Minecraft, so if you’re a gamer, you’ll probably think those are worth spending a few extra dollars on. (For the record, Borderlands Legends HD and Minecraft – Pocket Edition are $6.99 each).

As we said, the one thing stopping us from getting an iPad mini is the lack of a retina display, but that’s because we’re extraordinarily picky. With that said, iPad mini is very likely the single best portable platform we’ve played around with. It feels good in the hand, has a ton of variety, and is priced extremely well when you consider the myriad of functions it can perform.

Look out Sony and Nintendo. Apple was on your tail with the iPod touch and iPhone before, but the iPad mini is probably your biggest threat yet.