Compelling gameplay, but is it enough?

When we first saw Sports Champions 2 at E3 2012 this past June, we were kind of hesitant in playing it. See, there’s a lot to do and we didn’t want to waste our time with just another PlayStation Move game. Nonetheless, we played it anyways, and realized that we were doubting the game for no reason at all.

We played the first entry in the series – the aptly named Sports Champions – and while the technology behind Move was familiar, the gameplay was all its own, finally bringing beautiful graphics to motion controlled games that Wii Sports just never did. With that said, it wasn’t high on our list to continue playing (Halo: Reach had come out three days earlier) but it left a good impression with us about the Move peripheral.

So when Sports Champions 2 arrived on our desk for review, we were actually more excited than is probably healthy given that the game comes out right before Halo 4 and Call of Duty: Black Ops II, not to mention Assassin’s Creed III. And we’re happy to say that the game lives up to expectations.

Sports Champions 2 isn’t trying to reinvent anything from its last iteration, but rather bring some updated content to the mix. For example, where last game we had sports like table tennis and archery, this time around we’ve got bowling and, well, archery. Okay, so there is some overlap between the games, but that’s okay, because let’s face it, the archery was – and still is – fun as hell.

Archery is also the only sport returning, so don’t think that Sony just reissued their original title with a new numbered suffix. In fact, some games are based around entirely new mechanics, like skiing and bowling. 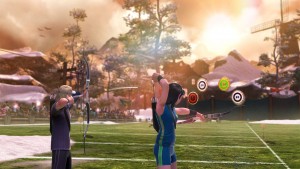 Sports Champions 2 is just plain fun. The game has little details that make you feel more in sync with the game, even if they are little gimmicks. Things like motioning to take an arrow out of your quiver before you pull back and fire it off made us more than giddy the first time we did it. And a few times after. Things like this wear off, but it’s these details that make the game instantly fun and hooks you in.

There’s a lot of talk about archery around these parts, and that’s for a reason. If you start with archery, you’ll be sorely disappointed by the rest of the sports. They’re just not as fun. It’s just as well, since developer Zindagi Games did have an entire title based around their archery mechanic, Medieval Moves: Deadmund’s Quest, which released for the PlayStation 3 last year.

It’s not that the other games aren’t fun, but rather not as fun as you’ll find with archery. See, there are customization options in archery that there just aren’t in other games. The archery mini-games are also a lot more dynamic, whereas a game of tennis or golf is simply a game of tennis or golf. There’s no real variety in those games, and save for the Move controls, there are better tennis and golf games out there if you want that experience.

You’ll find little annoyances with games that are more fast paced like tennis or skiing because there is a lot higher likelihood the PlayStation Eye camera will lose sight of the Move controller and mess something up. If you’re in a large space, you should be okay, but we draw the line at a game that makes us change our space to play it properly. Things work properly most of the time, but it’s super frustrating when they don’t.

Sports Champions 2 is a bright, colourful game that lacks a ton of imagination but manages to make up for (at least some of) it with some decent gameplay. Archery is tight, while tennis and skiing could use some work. Bowling is quite difficult, but that might be because we’re used to Wii Sports bowling being so darn easy. Of course, being difficult is certainly not a bad thing, but it seems out of place for other sports that are a bit simple to master.

Zindagi’s next version of Sports Champions will remain in our stable for a while, as it is a great party game that people can really get involved in. With support for multiple Move controllers, we’re sure it will become a hit during parties, but with the number of high quality titles coming out on the PlayStation 3, Vita, and other platforms, we’re not entirely sure it won’t fall by the wayside.