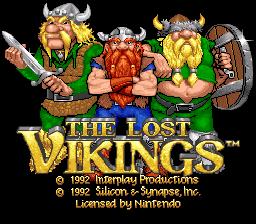 Well before Blizzard Entertainment released Warcraft, Diablo or StarCraft, there was Silicon & Synapse.  Even during its more humble days, Silicon & Synapse was a small game developer full of some promising ideas.  So promising that they managed to combine vikings, puzzle/platforming and time travel into one rockin’ game.  It may have been your standard video game plot from the 90s, but The Lost Vikings is probably one of the finest examples of puzzle platforming to date.

Just get a load of the plot: Three vikings are abducted by an alien emperor so it’s up to them to escape and battle through time and space.  These three each have their own unique skills so if they ever plan on going home to their families they need to work together.  Erik the Swift can run, jump and smash obstacles with his head, but has no offensive or defensive skills.  Baleog the Fierce can shoot arrows, swing his sword, but can’t jump or run so the areas he can explore are limited.  Olaf the Stout rounds out the party, carrying a giant shied that allows him to block enemy attacks, glide short distances and create a makeshift platform for Erik. 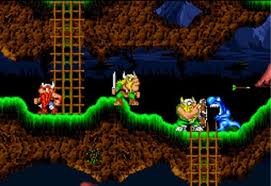 Alternating between these three characters is key if you plan on getting far through this game.  Organizing your movements can take a little bit of getting used to, but overall the environmental puzzles are pretty simple.  That lack of challenge never really takes away from the experience thanks to the co-operative play and exploration.  The Lost Vikings is also blessed with a ridiculously silly humor and plenty of colourful environments (ranging from pre-historic times to alien worlds) as well, so you’ll never get tired of the formula.  And did I mention how perfect the save passwords are?  I’m still perplexed why so many developers had to make such a simple feature so frustrating.

The Lost Vikings is nothing groundbreaking, but is a prime example in its genre.  This game never tries to be more than what it is, and instead relies on its amusing plot, quirky humor and simple yet fun gameplay to carry it forward.  It may not be in the same caliber as Blizzard’s blockbuster releases, but it’s still a gem among retro games.