Every review we’ve seen of Nintendo Land pegs it as the Wii U’s version of Wii Sports, but truthfully, aside from the fact that they’re both pack-in games, the similarities end there. Nintendo Land is far and away one of the best reasons to own a Wii U and the game gives Nintendo’s new console party games, solo adventures, and some plain old-fashioned fun. 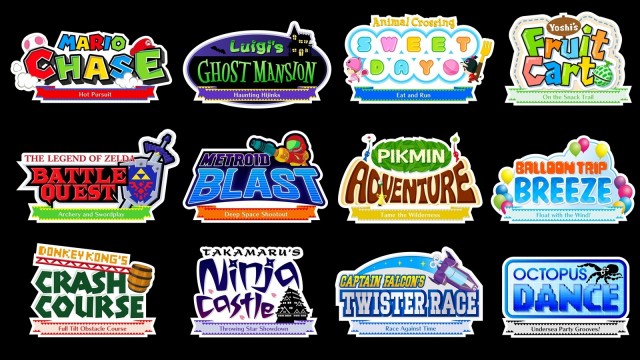 There are twelve titles built into Nintendo Land, a game that comes in under 3GB worth of space if you’re planning on buying it digital on Nintendo’s eShop. Each game is rendered beautifully, using your Mii as a character as you go through familiar environments in Nintendo’s stable of franchises. You could say that every major Nintendo franchise is a launch title, but that might be cheating.

Much of Nintendo Land follows a similar graphical style. It is clearly high definition, though whether that is 1080p or 720p remains to be seen. Either way, graphics are crisp and clean in a way we haven’t seen from a Nintendo console before. Characters we know and love like Mario and Link are rendered beautifully, although they’re not given the same amount of love as if they were in their own standalone titles. This probably isn’t the best title to show off the Wii U’s visuals, but it serves as a great introduction to what we can expect from Nintendo going forward.

Audio from each game is also superb, bringing in remixed themes as well as original tracks from Nintendo’s franchises. The Donkey Kong theme in particular is excellent given its classic retro style and the kind of game you play centered in DK’s universe. Audio coming from the GamePad is also slightly different than the audio coming from the television which simulates a sort of surround sound listening experience, although nobody is fooling us: this isn’t surround sound.

Rather than go through each title in the bunch, we’re going to highlight a few experiences you get with Nintendo Land. These games are the best of the bunch, although each one has something to offer that you might like.

What would a Nintendo multi-game title be without an entry from the Mario franchise? In Mario Chase, one player controls their player from the GamePad while up to four others have to work together to find where the GamePad-toting player is hiding. It’s more difficult than it sounds, and can be a real treat. Of all the games we played with a bunch of friends, this game came out on top as the most fun party game we kept coming back to. An interesting twist here is to try playing one-on-one, as two Yoshi characters enter the game, controller by AI, and are drawn to you like magnets. It actually makes a one-on-one game much harder than playing against two or three other people. There’s a really neat part of the game that lets you watch the chased player’s reaction on the big screen via the camera on the GamePad. This’ll make for some great laughs at parties.

Easily the game we’ve spent the most time in, Crash Course is a solo-adventure where you control a little Mii-like character on a set of wheels. You tilt and turn the GamePad to maneuver him through a world of pretty crazy obstacles to get to the princess at the end. There are four stages in here, and while that may seem like a lot, it should take you dozens of tries to get through all of them. This is the type of game where the first stage feels impossible until you’re whipping through it cakewalk-style. But don’t let that get to your head; the last two stages are modified versions of the first two, so if you plan on memorizing them to get through quickly, you’ll be sorely out of luck. This is a great game to play in bed (if your GamePad is within range) or just as a casual escape when you’re watching television.

The Legend of Zelda: Battle Quest 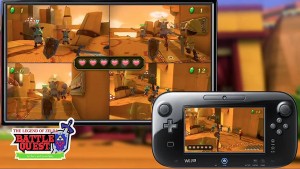 We’re huge Zelda fans, so having a Link-based title in Nintendo Land is a requirement for us. Luckily, it is also one of the better games of the set. In Battle Quest, you take hold of either a sword-bearing Link or an archer-Link to take out Bokoblins that come at you in mini-dungeons. There are no real Zelda elements here beyond swinging your sword or flinging an arrow, and the game looks like a mashup of Wind Waker and Skyward Sword. There are quite a few levels in Battle Quest which contrasts nicely against the three levels you get in games like Mario Chase. You can play the game solo, but it really shines with two other people. Any more than that and the game gets very crowded, and any fewer and it’s just not the same team-building experience. Either way, this is a worthy entry in the Zelda franchise considering its length and the fact that it’s a mini-game that somehow turned into a longer experience. 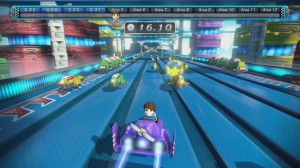 We’re not sure where they come up with these absurd titles, but regardless, Twister Race is actually a title we’ve spent a lot of time in. The premise is simple: you use the GamePad as a quasi-steering wheel, controlling your racer as it weaves in and out of obstacles and other racers, until you get to a checkpoint. The game ramps up in difficulty from there, and you continue your way through. The GamePad is the perfect size to mimic something somewhat similar to a steering wheel, but you don’t need to look at it most of the time. Steering works well enough, although it is sometimes impossible to avoid certain obstacles unless you move everything perfectly every single time, but that is all a part of the challenge in the game.

Nintendo Land is filled with a bunch of variety. In the main theme park setting (the area where you can get to all your attractions from), there is a tower with another simple retro-inspired game inside it, where you use the coins you collect from the attractions to play. Winning at this game isn’t difficult, but it yields a ton of prizes that populate the world below it to really give the theme park some character. Our favourite of the things it gives you is a massive wall of audio buttons that lets you change the theme music to any of a few sample tracks from each attraction.

Overall, it’s great to see that the pack-in with Wii U’s Deluxe Set has so much variety in both gameplay and characters. Where Wii Sports was very much one-dimensional and included relatively basic experiences, Nintendo Land is designed for experienced players as well as novices alike. It would have been nice to be able to adjust the difficulty level in each game so that anyone can try their hand at the more difficult stuff, regardless of their skill level, but we can’t say there is any shortage of games to choose from here. 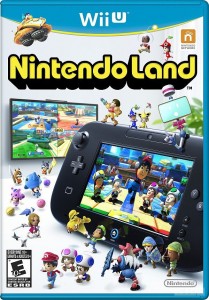 As a $60 standalone title, Nintendo Land isn’t the best value out there when you consider the same price gets you a copy of Black Ops II or Assassin;s Creed III. However, as a free pack-in, it makes the Wii U shine and does exactly what it needs to in order to show off the console’s power in a subtle way.

Nintendo Land seems built for downloadable additions, and we can easily see Nintendo going ahead and releasing a new game every month or a pack of games every few months to earn a few extra dollars. We would easily pay $5-$10 for an additional attraction or two, especially if it takes place in a Nintendo universe that we really love. Unfortunately, big-N has made no such announcement, but it does make sense if they’re heading in that direction that we would hear about it at a Nintendo Direct presentation in the coming months.