Nintendo has always struggled in courting the hardcore gamer audience. They’ve never been at the top of their game with third-party titles in the violence, blood, gore, and drugs category. Save for the latter (there aren’t any drugs in Ninja Gaiden III), we’re pretty sure Nintendo’s strictly lighthearted game days are over.

Tecmo and Team Ninja have once again gotten together in the name of Ninja Gaiden, this time to release the re-write of a game released earlier in the year and subtitle it Razor’s Edge.

We’ll start off by saying this: Razor’s Edge earns its Mature rating wholeheartedly. Where previous games in the series may have lacked ever so slightly, Ninja Gaiden III picks up and exponentially increases. Of course, we’re talking about blood and gore. There is no question that Razor’s Edge is very likely the bloodiest, goriest game we’ve ever played. We don’t like scary titles, and that’s not what this is trying to be at all, but there is something oddly awesome about a body being dismembered and blood spilling out of it like Niagara Falls.

Now, we’re not sadists or anything, or the game would’ve held our attention far longer than it did. It’s a good story and all – you get to play as Ayumi this time around as well, which is a nice addition – but it’s not as fleshed out (no pun intended) as we like our video games to be. We’re not saying everything needs to be Grand Theft Auto or Skyward Sword in terms of breadth, but it would be nice to have the hack and slash game mechanic as a component of the game rather than its main bullet point.

Razor’s Edge will challenge you to your core if you’re not used to its quick pace and combo-based fighting system. You may be moving quickly, but you’re just as quickly taking damage, and some enemies who seem easy are far more difficult than you might expect. There will be times where button mashing will be enough to prevail, but others where a fair bit of strategy is necessary for victory. Be prepared to be frustrated quite a bit, however, as there are some deaths (dozens of them, in fact) that just can’t be avoided, and they’ll drive you nuts. 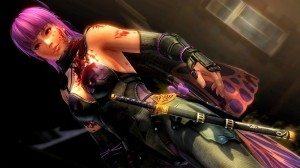 The graphical presentation of the game has its ups and downs. Thankfully, its down points can be easily forgiven as they amount to silly things like the ugly unreadable font used to count up your combo moves. The game’s graphical ups however, are stellar. Rain drops on pavement and concrete look real-life awesome, but the game does suffer the slightest framerate break when things get super chaotic.

With this game landing on Wii U, we have to mention its use of the GamePad. Because the game is so quickly-paced, you can rule out using the touchscreen for anything vital like your Ninpo magic. The game pad has a neat little layout and very easily-accessible buttons, but certainly nothing that matches the button-jabbing of the Pro Controller. Do yourself a favour: we know it’s Wii U, but put down the GamePad and grab a Pro Controller to play Ninja Gaiden III with. The game is almost better because of it.

There has never been a launch title on a Nintendo console this mature, for lack of a better word. Every other word is one your mother would never want to hear you say, while the blood and gore is something that would make Rambo cry like a baby. There is a fair amount of fun here, but once that wears off, we’re sad to say Razor’s Edge ends up being a bit thin.