Everyone knows the Halo series. Anyone who knows anything about gaming knows that Halo is likely responsible for the original Xbox’s success in the marketplace, with most people picking up a copy of the game with the new console. So we thought it fitting to look back at each entry in the original trilogy and what each brought to the table in terms of new gameplay, story, and excitement.

The original Halo actually started out as a project for the Mac. Steve Jobs introduced Bungie to demo Halo way back in 1999 at Macworld, and the game was received with much adoration. In 2000, Microsoft bought Bungie and Halo was forever an Xbox-exclusive title from that day forward.

There were a few reasons Halo did as well as it did. For one thing, it showed that a first-person shooter is more than possible on a console. It got the controls right, and managed to make the game a stellar example to the point that most other first-person shooters on consoles had extremely similar control schemes going forward.

Also, artificial intelligence was seen as a huge improvement over previous games. Marines would fight effectively against your enemy, the Covenant, while they would begin fighting against you if you killed too many of their squad mates.

Of course, the big draw in Halo was the storyline. Bungie weaved an interesting thread between Master Chief and Cortana, and really set up the tone for games going forward (whether we knew it or not). Story was perhaps the most important element to Halo as opposed to guns and grenades, which really changed the way people thought about shooters.

Bungie also managed to nail down vehicular driving as well as aerial-based combat that could happen at any time in any game. These features also extended to multiplayer which, due to a lack of Xbox Live support, was relegated to co-operative gameplay and split-screen slayer matches. In that respect, Combat Evolved became a Goldeneye 64 for the Xbox, ushering in new multiplayer experiences on Microsoft’s new black beast.

Halo: Combat Evolved is one of the best entries in the franchise, not only because of it’s great experience, but because it opened our eyes to the world of Halo. 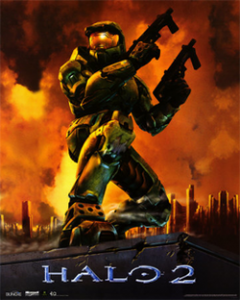 The sequel to the best-selling Xbox game of all time has unfortunately gone down as one of the biggest letdowns for any sequel in history. We happen to love Halo 2, and while it probably is not the best game in the series (okay, for sure it’s not), it did a lot of amazing things with the franchise that made us love the game.

First up were the graphics. With a three year gap between Halo: Combat Evolved and Halo 2, developers at Bungie had a lot more experience with the Xbox and what it could do graphically and sonically. They made use of every available polygon to create probably the best looking game on Xbox to this day. The game suffered from some nasty pop-in, but the graphics that did pop in looked stunning, if that’s any consolation.

Bungie actually introduced Halo 2 with a teaser trailer and followed it up with a nine minute real-time demo of the game’s second level at E3 2004, just a few months before the game actually came out. That demo remains our favourite for any game ever, actually, since it was the first long demo we received for it, something that hasn’t been done in a while.

The game itself was an incredible treat when we first popped it into the drive. We were able to not only witness incredible visuals and audio that changed as the game progressed, but also the ability to dual-wield weapons as well as board enemy vehicles. The ability to board vehicles has continued to make its way all the way through to Halo 4, while dual-wielding was phased out in favour of more simple controls in Halo 3.

Of course, Halo 2 was also widely decried for letting players control a Covenant Elite known as the Arbiter, but it was an interesting gameplay mechanic at the time. Sure, it didn’t work, but you can’t blame Bungie for trying.

The story was a bit short, and yes, there were a lot of changes to Halo 2 that made it different in good (and bad) ways, but we can’t help but remember the build-up to such an incredible game. Looking back, Halo 2 goes down in history as not the finest entry in the franchise, but certainly a reminder to cherish the incredible Halo experiences we have today.

This game was a make it or break it game for Bungie. If they couldn’t recover from the pundits who bashed Halo 2, there was no way they would be making another Halo game after it. But they were smart and did what they had to do to make Halo 3 a resounding success. As the first title in the franchise to grace Microsoft’s new Xbox 360, Halo 3 offered up a return to classic Halo as it should be: guns, vehicles, and none of that extra crap.

The story began as a direct continuation of the Halo 2 storyline, and showcased how pivotal Cortana is to the series. Master Chief was back in fine form, but without Cortana by his side, he would be nothing in this game. Of course, with story moments where he loses Cortana as she tries to save the universe, your patience is tested as you struggle to get through missions without her.

Halo 3 did a lot of things extremely well. It was an incredible feat for the franchise as it had stunning graphics and audio on the Xbox 360. It was also the first game in the series to include Forge mode in multiplayer, an editing tool that allowed players to customize and share their own maps. Bungie also brought Theatre mode to the table, a way to save your gameplay matches and share them with friends to show off incredible kills and maneuvers.

There was also a new class of item called equipment that you could use in single- and multiplayer matches to assist your attempt at thwarting the enemy. Equipment included the bubble shield and regenerator, as well as the power drain, which would immediately wipe your enemy’s health from the screen.

New weapon mechanics were also introduced, including two handed weapons that would slow down the player but offer incredible boosts in firepower in return. They were no match for someone sniping across the map, but picking up a turret and going one-on-one with an assault rifle and there was no contest.

Halo 3 was the introduction to stunning set pieces for the Halo franchise that told the story in a more cinematic way. In addition to Cortana’s terrifying monologues, you could destroy a Covenant Scarab in-game and see everything explode to the ground without exiting to a cutscene.

The story in Halo 3 also had some pretty wonderful nods back to the original game in the series, culminating in a Warthog race to get aboard UNSC Forward Unto Dawn as the unfinished Halo disappeared beneath your wheels.

Overall, the Halo series has offered us some of the best moments in gaming in history. There are certainly moments we didn’t love at the time – Halo‘s Library coming to mind – but without these moments, they just wouldn’t be the same game at their core. Bungie’s franchise is one to remember and enjoy playing as the game becomes more and more advanced in its next renditions. We’ll see how 343 Industries manages to take the reigns to the next titles in the franchise, but so far, they seem to be doing a pretty great job.