What do you say about a new entry in the Mario series? This version of the game is one of the quasi-two dimensional variants as opposed to the 3D nature of something like Super Mario Galaxy. We’ve had quite a few of these games recently, the most recent releasing on the 3DS just a few months ago. But what if this version of the game changes enough to make it a worthy successor to the Wii game New Super Mario Bros. Wii?

That game was revolutionary for a few reason. Not only was it the first entry in the 2D mixed with 3D stable of Mario games, it was also the first foray into motion controls for the franchise, outside of its groundbreaking Galaxy series.

This time around, much has remained the same, although there is at least part of a new game here that makes it a worthwhile entry in the franchise. In addition to Mario’s first outing in full 1080p high definition, the GamePad allows for some new control mechanics in multiplayer while there are new gameplay elements to keep the series fresh.

So the story in NSMBU begins as Princess Peach is captured from …. wait, what? She’s not captured? Okay, no spoilers ahead since this all happens in the first minute of the game, but Princess Peach is actually jailed within her own castle while Mario, Luigi, and their toad-buddies are thrown a few lands away. That’s pretty much where the dissimilarities within the storyline end. Rather than fighting through the worlds away from the castle, you do the same towards it until you reach home again and, yes, save the princess.

Visuals are one thing in NSMBU that shouldn’t disappoint at all. Rather than rather plain looking backgrounds for levels (there’s only so much developers can do given that this is a side-scrolling game), there are beautiful rendered backdrops that bring the game to life. Castles, clouds, and even entire forests live in the background of some levels. The texturing on the Koopa Kids’ flying ships is incredible, and the game pops to life with an incredible amount of colour.

Some levels have themes to real-life culture, such as the level themed after Van Gogh’s Starry Night painting. The level doesn’t last very long, but the over world also takes on some of Van Gogh’s art style to really tie everything together. There aren’t enough of these moments, but they are beautiful to behold (the first time, at least).

The audio in NSMBU is a bit disappointing since it’s slightly higher quality versions of what we’re used to from both Wii Mario games as well as those on the 3DS. The tunes are familiar and fun, of course, but they’re becoming too familiar. The audio to Mario used to be a catchy tune to get stuck in your head, but now it’s quickly becoming a more annoying song than Gangnam Style.

Gameplay is what made the Mario series a success in the first place and we’re glad to say that Nintendo managed to include quite a few new mechanics here to make things interesting. In addition to a few new stages like the entrance to Bowser’s ship and the clock tower fortress (a nod to Super Mario 64, we think), there are some old classics like mushroom houses and mini-games between levels.

The over world is also home to some mini-games of its own. They’re very quick timing-based puzzles that happen in real-time where you must get past a floating penguin or escape a Fuzzy (yes, they’re actually called Fuzzies) that’s going around in a circle on the map. 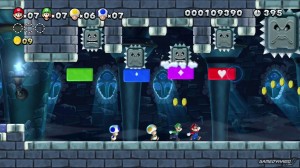 Multiplayer can be fun and friends can help you out.

Multiplayer gameplay has changed, although in such a minor way, it’s almost laughable. The addition of GamePad-based controls is excellent, but it really takes one person out of the experience. Up to four people can grab Wii Remotes and get their game on, while the odd-man out controls the placement of blocks in the level to help (or hinder) their teammates. The problem is, while we thought the GamePad-enabled play would be the most fun, it means you’re not commanding Mario, Luigi, or a toad, which is the entire reason to play a Mario game to begin with. We’re not disappointed that there’s some sort of multiplayer component, but we wish it were a little deeper. Some online play would certainly have been nice.

There is some interesting integration with Miiverse in NSMBU which, for those unaware, is like a stripped-down social network for games. If you pass a level without taking damage, the game will reward you (sans achievement) with a message letting you gloat about it to Miiverse. The same happens when it takes you a few tries to pass the level. You’ll also be able to see where other people made it through or had difficulties. Nintendo was smart to make these notifications pop-up rather infrequently as well as unobtrusively (they look like a balloon with a Mii face in them) so that you never feel like you’re leaving to not play the game you came to play.

New Super Mario Bros. U is a Mario game through and through.

At its core, New Super Mario Bros. U is very much a Mario game, but it is one that we’ve played (and played) before. The series is becoming a little stale and it’s almost making us wish we don’t hear anything about even a full-3D Mario title until at least E3 2013. With that said, the series has cleaned up a bit, graphics become much more appealing to the eyes and audio improving (though only marginally). Of course, just the fact that it is a Mario game means it needs to be played, especially since it’s a launch title for Wii U.

Speaking of the new console, there are times where New Super Mario Bros. U feels like a tech demo for the new console. Of course, Nintendo Land holds that crown, and while the game feels a little thin overall, that is to be expected from a launch title.

What may have made this game a must-buy (aside from the fact that it’s a Mario game) would have been some cross-functionality with New Super Mario Bros. 2 for 3DS, or even a coin rush mode that transfers coins collected in both games to contribute to your million coin goal in NSMB2 for 3DS.

New Super Mario Bros. U is a title to play through once because the release of a new game in the franchise every six to eight months is kind of a ritual at this point. If you skip this entry in the series, you won’t be missing a ton, but it’s always good to reunite with Mario and friends, especially when you’ve got a new console to do it with.