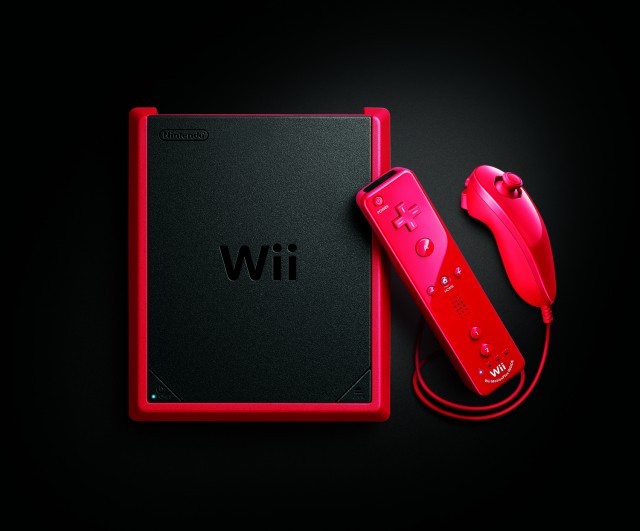 A bit of a surprise this morning (yet not so much) as Nintendo announced this morning that they are launching Wii Mini, a smaller version of their hugely-popular Wii console.

The console, available exclusively (for now) in a matte black and red-trimmed design is slimmer than the original Wii at just slightly longer than the length of a Wii Remote. It will also come with a red nunchuk alongside the red Wii Remote with MotionPlus built-in.

What is probably most intriguing is not the Wii mini’s top-loading design, the lack of WiFi and online connectivity, or the new red and black fascia, but rather the fact that the console is (brace yourselves):

This is a huge thing for us, in a country where we seldom get different consoles from manufacturers. In Nintendo’s press release, they mention the following:

Wii Mini is available exclusively in Canada during the holiday season. No information is available about its potential availability in other territories in the future.

The red exterior makes a lot of sense now that we’re seeing it, and we love the idea of a console exclusive to Canada. The Wii Mini is launching at an incredible price of just $99. Take a look at the full press release below and be sure to pick one up if you live in our Great White North when the Wii Mini launches December 7th!

VANCOUVER, BC., Nov. 27, 2012 – After nearly 100 million sold worldwide, Nintendo’s Wii console is getting a new look and a new price. On Dec. 7, the new Wii Mini home console launches in Canada at a suggested retail price of just $99.99 and puts the focus squarely on Wii games. The system can play more than 1,400 disc-based Wii games. Wii Mini is smaller than the original Wii system, and comes in matte black with a red border. The system comes with a red Wii Remote Plus, a red Nunchuk controller and works with most Wii accessories.

“There are games in the Wii library for every type of player,” said Ron Bertram, Nintendo of Canada’s vice president and general manager. “Wii Mini is a great gift for
the holidays that brings everyone in the family together to play. Wii Mini has a mini price, but it’s all about big fun.”

Wii Mini is designed exclusively to play Wii games. Its family-friendly design has no Internet capabilities and does not play Nintendo GameCube games. It’s a great value for first-time Wii owners who just want to jump in and experience all the great Wii games that helped usher in a revolution in motion-controlled gaming. Wii games are available at a variety of price points for every kind of shopper. Some top Wii games during the past six years include:

Wii Mini is available exclusively in Canada during the holiday season. No information is available about its potential availability in other territories in the future. Remember that Wii Mini features parental controls that let adults manage the content their children can access. For more information about this and other features, visit http://www.nintendo.com/wiimini.

About Nintendo: The worldwide pioneer in the creation of interactive entertainment, Nintendo Co., Ltd., of Kyoto, Japan, manufactures and markets hardware and software for its Wii UTM and WiiTM home consoles, and Nintendo 3DSTM and Nintendo DSTM families of portable systems. Since 1983, when it launched the Nintendo Entertainment SystemTM, Nintendo has sold more than 4 billion video games and more than 637 million hardware units globally, including the current-generation Wii U, Nintendo 3DS and Nintendo 3DS XL, as well as the Game BoyTM, Game Boy Advance, Nintendo DS, Nintendo DSiTM and Nintendo DSi XLTM, Super NESTM, Nintendo 64TM, Nintendo GameCubeTM and Wii systems. It has also created industry icons that have become well-known, household names such as MarioTM, Donkey KongTM, MetroidTM, ZeldaTM and PokémonTM. A wholly owned subsidiary, Nintendo of America Inc., based in Redmond, Wash., serves as headquarters for Nintendo’s operations in the Western Hemisphere. For more information about Nintendo, please visit the company’s website at http://www.nintendo.ca.