We’ll admit that we knew very little about Ratchet and Clank: Full Frontal Assault when we got it in our hands about a week ago. We’ve played every game in the series so far and expected Insomniac Games’ trademark platform adventure style of gameplay with some very quirky bits thrown in for good measure.

What we got, however, was a new take on the sort of platform adventure style of gameplay with all of its quirky bits thankfully intact. In short, the game has its issues, but they’re far from deal breakers by any means. 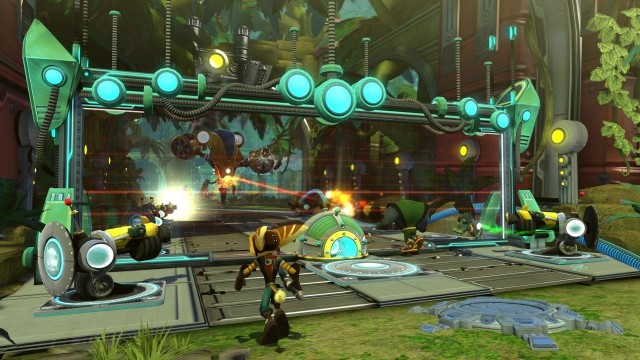 We’ll get the minutiae out of the way: Full Frontal Assault excels in both the graphics and audio department, but it doesn’t really do anything new. The game is bright and colourful and the audio is crisp and clear, but this isn’t Far Cry 3 or Halo 4, nor should it be. It would’ve been nice to see Insomniac really push the envelope here, but there are two reasons they probably didn’t. First is the Vita version. Full Frontal Assault is one of the few games that features Sony’s Cross Buy which means buying the PlayStation 3 version of the game nets you a copy of the Vita version, too (when it launches; it’s been delayed until January). If the game looked like it was designed for the PlayStation , the Vita version would look inherently junky. Second is price; this game is only twenty bucks. For all intents and purposes, it falls a bit short of truly being a full game, but for a triple-A first-party title, this could’ve easily demanded $40, especially because you get the portable and home version of the game.

With all that out of the way, we jump into gameplay. This is the first game in the Ratchet and Clank series to diverge from the platforming action-adventure style Insomniac loves and does so well. Your usual suspects in the QForce begin its journey to rid the galaxy of its enemies but in a different way than jumping around strange worlds to reach your goal and hit Captain Quirky (or whatever his name was) on the head. Instead, you take on a much more defensive role, protection your base and its generators from your foes. Sound familiar? Full Frontal Assault is kind of a mix between Halo: Reach‘s Generator Defense and Firefight modes, alongside some tower defense games and skinned with Ratchet and Clank.

You use the bolts you collect from enemies to buy defense and weapon upgrades like mines and turrets, and this part of the gameplay never really feels tedious. Where it does get frustrating, however, is the fragility of your generators. These things will crumble very quickly if you aren’t vigilant in later stages in the game, and you can end up restarting over and over (and over) again.

Gone are the millions of combinations of weapons you could build in Ratchet and Clank Future: Weapons of Destruction, but that was also a game hellbent on including every single combination for a weapon anyone has ever thought up. Then again, Future probably remains our favourite game in the series, so perhaps it wouldn’t have been too horrible for Insomniac to include just a few more weapons than they did.

Enemies in the game are remarkably well thought out and very unique. You’ve got everything from purple spiked guys to helmeted cyclopses lurking towards you. They’re hilarious and frightening at the same time, and it’s an awesome thing to witness.

Perhaps our favourite part of Full Frontal Assault (aside from its ridiculously awesome name; Up Your Arsenal comes in a close second) is the fact that strategy plays a far bigger role in this game than it has in games past. Where in past Ratchet and Clank titles, you could go through 90% of a level just slashing and jumping, this game makes you think about defense tactics more than it does about smashing bolts out of your little foes. 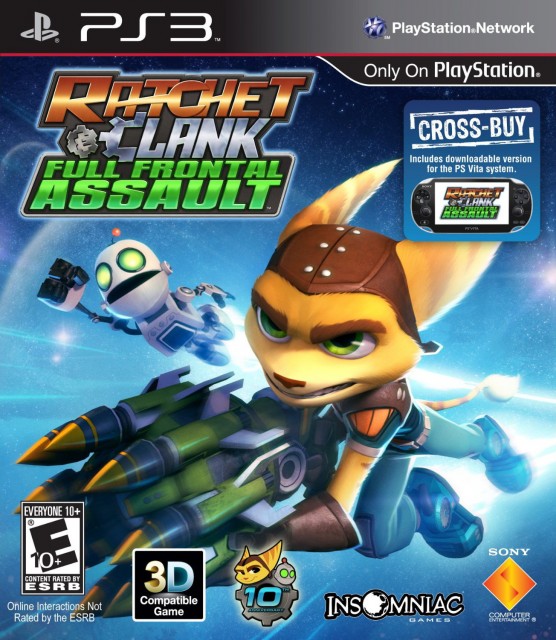 Full Frontal Assault also has a pretty robust competitive multiplayer mode thrown in for good measure. Playing with other people makes the game far less predictable than it does when you’re playing against a computer-based opponent, and there are a host of trophies you can earn as well. Voice chat rounds out the mode by letting you taunt your opponent, although we found it to be choppy for some reason. We can’t be sure if that was the server or the game itself; we’ve never had that sort of problem with our connection.

The new Ratchet and Clank is a surprise and let down all at once. We got our hopes up into thinking we’d be playing a variant of the very familiar (and very awesome) style of gameplay we’d come to expect. At the same time, we were pleasantly surprised that the gameplay we discovered turned out to be as fun as it did. You won’t find a ton of replayability here unless you venture online and grab a friend to join you, but for $20, you’ll find a ton of value here.

Don’t forget, the Vita version of the game comes out in January, so if you enjoy Full Frontal Assault, be sure to grab it on the go when it launches!