The game that broke our hearts.

We’ve been huge fans of the Jet Set Radio franchise since the first game we played in the series, Jet Set Radio Future, on the original Xbox. Since then, we haven’t seen a single game in the franchise, and while that’s a true shame, so is it playing the recently released Jet Set Radio for Xbox LIVE Arcade, PlayStation Network, iOS, Android, and Windows via Steam. Basically, the game is on every platform that doesn’t require a physical disc.

We played Jet Set Radio on the PlayStation Vita where we got it free with our PlayStation Plus subscription. We also tinkered around with the game on iOS but found the game to be much of the same, so we’ll be taking a look at the Vita version we played.

Developed by Blit Software and published by Sega, Jet Set Radio is a near-perfect port of the original game in the franchise that debuted on the Sega Dreamcast in 2000. We say near-perfect because the game is missing one entry in the soundtrack (Sega just couldn’t get the rights to the song) and, likely more importantly, something was seriously lost in translation.

Gone are the days of smooth, forgiving gameplay. Where it used to be relatively easy to master mounting a handrail to grind, the game has become a fiend for pixel-perfect accuracy. The game becomes remarkably frustrating in these moments because it is these game mechanics that make up the entire game and getting them wrong is blasphemous.

We’re probably being a bit too harsh on the game since we’re really only angry about the controls. Beyond the way the game handles itself, Jet Set Radio is, at its core, everything we love about a Jet Set game. The characters are there, graffiti is wacky, and the music is just plain bizarre. 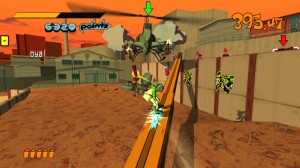 Graphics on the Vita version we looked at were nothing short of classic Jet Set Radio in that the screen rendered beautifully bright cel-shaded images. We noticed a ton of framerate drops, however, but for some reason, we were okay with it. Truthfully, it got pretty bad at a few points, but the games we played before it all suffered the same issue, so it was like the framerate issues were built-in nostalgia, even if in reality, they’re just poorly design code.

Audio in the game feels like its ripped straight from the original title, including the very familiar thwack of your wheel hitting the pavement and the sound you make when you get hit by a car in Shibuya Terminal. The soundtrack is some of the best in the series, though we’re still partial to the tracks from Jet Set Radio Future, a game that remains our pick for the best in the series.

DJ Professor K returns with all the usual suspects like Gum, Beat, and YoYo, as well as the Golden Rhinos and SWAT Teams of the Rokkaku Police. We met every returning character with a smile, even those that were simply there to put us away for the graffiti mayhem we were causing.

The storyline is exactly that of the original title. You take on the role of one of the GGs to cover up rival teams’ tags on the streets of Japan, all the while fighting against the police who are of course trying to stop you.

Jet Set Radio is a game you should experience if you have any interest in seeing a game that is still unmatched in unique visual and audio style, even if the gameplay is a bit unforgiving at times (okay, all the time). This is a game that should be played at least once in your life, and if you don’t play the whole way through, hopefully you’ll be able to see the work that has gone on behind the scene to create this vibrant, living world within the tiny confines of a video game download.