We’re doing something a little different with a double hardware review. These two items go hand-in-hand, of course, as we’re looking at Sony’s PlayStation 3D Display and Blu-Ray Disc Remote. 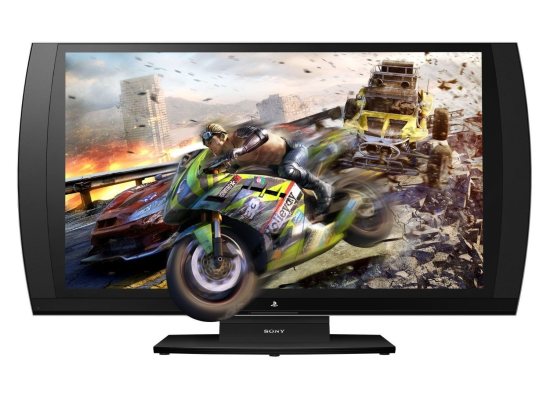 This display was actually first announced at E3 2011, where it was met with much praise for being a low price entry into the high-quality television market. The specs on this screen are incredible: 3D viewing (duh), 1080p resolution, and 120Hz, all shoved into a 24″ package. The television itself is very thin and easy to move around, and while it doesn’t have a tuner built-in for your cable, most people use cable boxes anyway.

Perhaps the best part about the display at launch was its $499 price tag which is now down to a staggeringly low $150 if you get to the store during a sale. Otherwise, this thing is priced right around double that, which is still a great deal.

Colour on the display is excellent, and because the resolution is a full 1080p and the display is not massive, pixels are very hard to spot unless you’re very close to the screen. It looks clearer and crisper than a typical LCD display. It isn’t as bright as an LED television, and that’s probably our only gripe about the display itself. When playing in sunlight, it can be difficult to make out some objects on screen, particularly if they’re in dark areas. Contrast is excellent, and you’ll never notice any artifacts caused by the screen itself, but if your source isn’t clean, you might have a few issues, but that’d be true of any display.

Perhaps the best reason to buy this display as a true gamer is if you’re the type to have local multiplayer sessions. The set has a technology called SimulView which lets you use the television’s 3D functionality in a different way. Rather than seeing objects in three dimensions, two players can each see their own two-dimensional images at full size on the screen. It works by relegating one player’s screen to one set of active glasses and the second player’s to the other. The technology works very well but it isn’t perfect; there’s a slight bit of ghosting noticeable. It isn’t nearly bad enough to let you screen-watch by any means, but it can be annoying at some slower moving sections.

Unfortunately, there aren’t a whole bunch of SimulView games available, even though the display has been out for well over a year now. The only titles you can play with Sony’s technology are Super Stardust HD, Gran Turismo 5, Motorstorm Apocalypse, Motorstorm RC, Killzone 3, and MLB 12: The Show. You also only get one set of active glasses, so you’ll have to pick up a second set at around $50 for this to make any sense. That’s a pretty steep price of admission if all you’re going to do is play SimulView games, but we’re not sure anyone is buying this thing for the sole purpose of SimulView games.

In terms of connections, the display includes two HDMI ports as well as a component video input. That’s it, but that’s all there really needs to be since this thing is aimed at the dorm roomer who probably only has one or two consoles and maybe a cable box. This will handle all three at the same time. The inputs are unfortunately on the side of the television, and while they’re inset a few inches, a thick HDMI cable will not bend smoothly enough to hide behind the display. We would’ve also liked for this package to include a remote control, but alas, that’s why this review has two parts.

The second part of this review is of the missing remote. If you plan on buying the PlayStation 3D Display and you don’t already have a spare Sony or universal remote hanging around, you’re going to be getting up to adjust the volume and source input a lot. Luckily for us, Sony thought it pertinent to release what they’re imaginatively calling the Media / Blu-ray Disc Remote Control. Okay, not so imaginative after all.

This thing is a remote, but it’s a great one at that. It has both Bluetooth as well as infrared built-in so that you can control all your devices. The Bluetooth is for the PlayStation 3 (and it also replaces our original bluetooth remote), while the infrared is for the television and any amplifier or sound system you have attached to it.

The remote is a typical Sony piece in that it is entirely too long and has entirely too many buttons (66 total) and does entirely too many things. Of course, this is a fully functional remote, but we can’t help but feel that some functions could be mapped out in a different (and simpler) way. With that said, it is pretty much the perfect remote, even though some oft-used buttons like play and pause are a bit small.

It’s unfortunate that Sony didn’t include a remote in their PlayStation 3D Display, but they’re lucky that the one they did create is worth picking up if you don’t already have something that will work. And at $19.99 for a bluetooth and IR-enabled remote (during Sony’s Play Days sale), they’re practically giving these things away. Except that, you know, they’re not. Or they would have put it in the box.

If you’re in the market for a small but excellent quality television for gaming, movies, or television (provided you’ve got a cable or satellite box for the latter), Sony’s PlayStation 3D Display is probably your best bet. It can be found for anywhere from $150 to $300, and while any price in that range makes it worth picking up, we wouldn’t blame you if you waited for a discount.