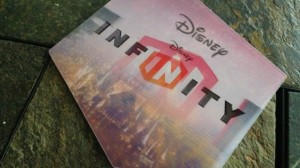 According to a source at Polygon (hint: one of our upcoming Favourite Sites), Disney is set to launch a new ‘game initiative’ called Infinity in January. The source says:

Disney Infinity will be an open-world sandbox game that combines the best of Minecraft creation with the absurdity of Just Cause‘s over-the-top action moments, all in a child-friendly world populated by iconic Disney and Pixar characters, according to videos and images leaked to Polygon.

This isn’t currently being described as a game so much as a gaming platform of sorts, and it is set to hit just about every interactive device you might have. Infinity is rumoured to be in development for Xbox 360, PlayStation 3, Wii U, as well as iOS and Android devices. We’re not given any concrete details, but we’d assume that with full console as well as iOS and smartphone development, there will likely be a version of the title on Nintendo’s 3DS and PlayStation Vita as well. 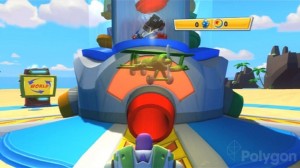 Aside from the huge multi-platform development, Infinity seems to be a pretty massive undertaking. The game is billed as something to allow player to control well-known characters from a bunch of Disney properties, including Toy Story, Cars, Monsters, Inc., and The Incredibles, among others. We’re not sure if any LucasFilm characters will make the jump, but from what we’ve seen, this game isn’t supposed to be an MMO targeted at older players, but something for the in-betweener segment.

In the videos Polygon obtained, characters are all interacting with each other in some pretty interesting ways, including flying, driving, running, and jumping. This is in addition to item use which could include, as you might expect, shooting ray-guns, shooting slingshots, using grappling hooks, and driving miniature tanks.

Perhaps the best attribute of Disney itself is the variety within and among its franchises. The footage that Polygon saw also shows that different characters do different things and not all characters can do everything. Some will be able to hop into specific vehicles, such as Buzz Lightyear, who we’d assume will be the only one to fly his spacecraft. Or Woody, who would be the only one able to ride his horse. There are an astounding 30 abilities in the game, which makes us wonder how well implemented each will be. Having that many abilities can be great, but at what expense if there are too many to learn?

The key takeaway here is that Disney is setting up Infinity to be a platform that is designed to be around for a very long time. It will evolve to support Disney’s growing cast of characters, and will see numerous iterations, likely in multiple console generations. It is also likely they Infinity becomes a movie with its ensemble cast that bridges Disney universes. 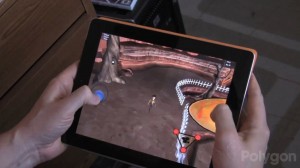 The studio behind the production of this mega-title is Avalanche Software who also developed the video games for Toy Story 3 and Cars 2. They say that Disney Infinity is “a way for people to play with all of the Disney properties any time, any place, across devices.” This hints to us that Infinity might in fact be a cloud-based game whereby cloud game saves and a perpetual world exists so you can hop from your iPhone to your Xbox and back again without skipping a beat in the game.

The original premise for the game was to include NFC-based physical toys to make the world come to life, such as with Activision’s Skylanders, but it appears that has been scrapped in favour of a cheaper and more elegant gaming experience. NFC-enabled toys are great, but Disney might not be able to make it work if parents are already sick of all the Skylanders toys floating around the house. 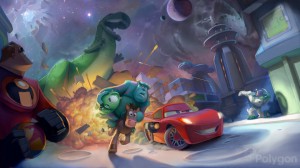 It’ll be very interesting to see where Disney takes their new Disney Infinity franchise and just how much their universes cross into one another. This has the potential to be absolutely huge, and it’s very interesting that it’s sent out invitations to the game’s announcement in January so many weeks in advance. It could be that Disney knows how big this could be and they want as much hype as possible. Dare we say the leak that Polygon uncovered is to strum up some more interest?

All eyes are on Disney now, and regardless of what they announce on January 15, there’s one thing we’re almost certain about: we’ll be seeing a lot more (and possibly playing a lot more) of Disney Infinity at E3 2013.