It looks like OUYA isn’t going to be the only game platform running Android in the near future. A new company called PlayJam is entering the market with their own diminutive console and new controller experience for your television.

PlayJam calls itself a “Smart TV company,” though what that means, we’re not entirely sure. PlayJam actually seems to be a platform that is available on most Smart TV systems from major manufacturers like LG, Sony, and Samsung.

Rather than be content in that space, however, they’re beginning to branch out into console manufacturing. In actual fact, GameStick is a large USB stick-sized device that plugs directly into your HDMI port on your (presumably non-Smart) TV and gets its power from HDMI and puts out a Bluetooth signal for the included controller to function.

Beyond that, there are a few things that strike us as interesting and odd at the same time. First, developers need to code for the PlayJam GameStick platform from what we understand. Second, the user interface when loading up games and apps looks strikingly similar to OUYA’s design. Now, we’re not saying they copied it or anything, but the light grey aesthetic and game tiles do look eerily, well, identical.

We do think it’s ridiculously awesome that the GameStick can draw all the power it needs from the HDMI port, which means you won’t be needing another power cable running from the jungle that is the back of your home entertainment setup. With that said, the videos we see on Kickstarter don’t have that function working yet, so it might be more of a challenge than they’re making it out to seem. It does appear that you can power the thing by USB if your TV has USB ports but no powered-HDMIs, which should still help tame your cable jungle.

The design of the controller seems remarkably uncomfortable yet familiar at the same time. It looks like an NES controller with SNES-like rounded corners, a couple of slide pads borrowed from Nintendo 3DS, and four buttons laid out just a bit too much like the OUYA layout, albeit with the letters, P, L, A, and Y, instead of O, U, Y, and A. We’re also noticing that the buttons in the centre of the controller don’t quite line up with each other, which is a bit odd considering this is a near-final product. It doesn’t really inspire much confidence when a company gets these tiny details wrong.

Perhaps the best thing about this is that it is on Kickstarter which, for OUYA backers, might seem like overkill, but for people who didn’t get in on OUYA and want some variety, might be just the thing. It doesn’t hurt that it’s a bit cheaper, too, at just $79 compared to $99 for OUYA. 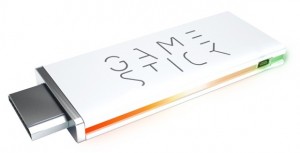 In less than 12 hours, PlayJam has managed to reach more than 10% of its goal of $100,000 in crowd-sourced funding, a target they should be able to hit within the next few days at this pace. The schedule for delivery is said to be within the next 5-6 weeks, although it seems a bit lofty for a project we’re only hearing about now. Then again, with the competition from other manufacturers (OUYA alone, actually; we just got tired of saying it), it makes sense that PlayJam wants to get this thing out as soon as possible. We’re just not sure it is possible; with the first production samples coming from China in February, how can they expect to fulfill potentially thousands of orders within a month or two after that, assuming no tweaking to the final product whatsoever?

This kind of stuff is what we live for. To see a relatively small company make it big on Kickstarter with the help of other gamer nerds like us. We’ll have all the details as GameStick becomes reality, so make sure to keep in touch on Twitter and Facebook with us for all the latest!