Some awesome news for superhero fans today! Injustice: Gods Among Us will be getting a collector’s variant of the game called the Battle Edition.

The price of the package is a bit steep at $150, but you get a friggen’ fight stick with illuminated buttons in the package! There are also three DLC skins based on the DC Comics series THE NEW 52.

Unfortunately, the Battle Edition doesn’t come with the cool extras you get in the more-standard-but-still-above-regular-version of the game called the Collector\’s Edition. In that package, for a penny under a cool hundred bucks, you\’ll get a DC Collectibles statue featuring Batman, Wonder Woman, the Fortress of Solitude, and the Last Son of Krypton’s escape ship. You also get a collector\’s edition version of the Injustice comic book, DC Universe animated film Justice League: Doom (DVD version for the Xbox 360, Blu-ray version for the PS3), and the same skins you get with the Battle Edition. 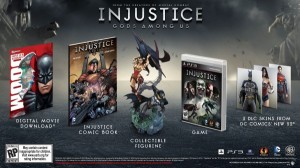 For our dollar, we’d take the Collector’s Edition of the game over the Battle Edition any day. Not because we want to save the fifty bucks (though that is part of it), but because there are so many more bits of awesomeness in the middle package of the game that it makes more sense as a practical purchase. I mean, sure, we want a cool glowing fight stick, but for a game like Injustice which is designed for a controller anyway, it would be a bit of a waste.

Plus, we\’d get more use out of the statues than we would the fight stick, anyway.

Injustice: Gods Among Us launches for PlayStation 3 and Xbox 360 on April 16th.