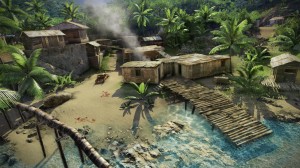 Lots of DLC news in the past few days, it seems, as Far Cry 3‘s awesome fan-letter has now launched. Of course, we’re referring to Ubisoft giving away free downloadable content to Far Cry 3 owners on the PlayStation 3 called High Tides.

Adding to the co-op story of Far Cry 3, the High Tides DLC is actually a pack with two new story chapters, each with four or five missions. Hoyt’s privateers have ambushed four survivors (for which character skins are available), Mikhail, Callum, Tisha, and Leonard, and taken them hostage. Of course, it’s up to you and your friends to escape the underground prison in which you’re held captive, and get off that God-foresaken island!

We actually don’t know a whole heck of a lot about the downloadable content aside from the fact that it is being released today. Of course, it is totally free which is a huge benefit, and looks to be relatively long, at probably about three to four hours of decent gameplay. We loved the game when we got our hands on it a short while ago, so go grab it!

Sorry, Xbox 360 and PC owners; this one is a PS3 exclusive available on the PlayStation Network right now.