The service has a veritable ton of features just in time for some of the first games of the (truncated) season. Unfortunately, the service is only available for Gold members, but for those without cable, $50 for a subscription to the service (plus the Gold membership) is a small price to pay to get all your hockey goodness. Hell, even if you have cable, NHL GameCenter is the way to watch them, and there are a few reasons why.

First up, if you don’t have time to watch the whole game, you can watch condensed replays so that you can squeeze three games into your usual two hours of hockey. There’s also the ability to keep up with your favourite teams by personalizing your experience to get the most out of the service.

Season Central will give you a calendar view of the entire league schedule (though that’s not saying much since it’s January), and is the best way to find out when your team is playing. 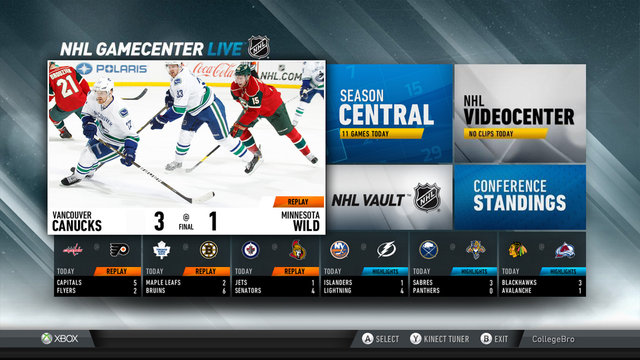 There’s also a split screen feature that will actually stream multiple games so you can watch your home team while you keep an eye on that other team you secretly love but can’t tell anyone about. You know, like the Leafs.

Our favourite feature is the ability to watch classic moments from over 800 games in the NHL’s storied history. You won’t find every game ever played, but all the big ones like the Original Six battles from the 1960s and all the Stanley Cup playoff games will be available.

And this wouldn’t be an Xbox LIVE service if there wasn’t the ability to use your voice and gestures to control all the action with Kinect.

Put bluntly, it sucks that it has taken hockey so long to get back into our living rooms. But it is back, and now we’ve got NHL GameCenter for Xbox 360 to catch all the goodness in some pretty awesome ways. The service is also available on PlayStation 3 and other mobile devices, and your $50 subscription will grant you access to the service on all of these devices, so you can check out your favourite games on the go.