Sony and NaughtyDog are promising a new epic with The Last of Us, and they’re delivering with a bunch of collector’s editions of the game.

In North America, we’re getting three versions of the game, two of which are collector’s edition and one is the normal boxed title.

The first step up is to a package called the Survival Edition which will include the game, a full size hardcover art book (by Dark Horse), a Steelbook version of the game, a copy of the first issue of The Last of Us – American Dreams, and a NaughtyDog sticker sheet, whatever that means. All this will be bundled with the Sights & Sounds DLC pack which includes the game soundtrack, PS3 theme and avatars for Winter Joel and Ellie and be priced at $79.99.

These two collector’s edition entries confuse the hell out of us, to be honest. The statue that comes with the Post-Pandemic Edition is massive, at about a foot in height (not to mention a standalone price tag of about $200), but getting that statue means you miss out on something far more valuable: the art book. The only item the Survival Edition of the game contains that the Post-Pandemic Edition doesn’t is that book which will likely prove far more worthy of a collectible as the years go on. Also, the price being half of what it is means you’re going to get far more bang for your buck over the regular edition as well as the exorbitantly-priced $160 version of the game.

In the UK, there are two slightly different versions of the game, awesomely named after the two main characters of the game, Joel and Ellie.

The Ellie Edition of the game includes a mini art book for the game, mini comic (based on what appears to be the same as the American version), a screen print effect poster, both DLC packs from the North American Post-Pandemic Edition, a DualShock 3 controller skin featuring Ellie, as well as an Ellie LittleBigPlanet Sackboy costume. You also get a nice canvas wrap to put all of your collectibles, and the game comes in a very cool monochrome box featuring Ellie’s cute teenage mug.

The Joel Edition of the game is basically the same, though the game’s packaging, controller skin, screen print effect poster, and LittleBigPlanet costume are of the male protagonist, as you might expect. Each of the UK’s upgraded editions will command a premium over the regular £39.99 price tag of the game, but official pricing hasn’t been announced for those versions just yet.

The Last of Us launches worldwide on May 7th. In the meantime, take a look at the collector’s editions in the gallery below. 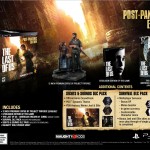