When Crystal Dynamics announced its reboot of the Tomb Raider franchise at E3 2011, we were floored. The game was gritty, brutal, and beautiful, and it stayed with us long after we left the theatre where it was announced.

We got the chance to play the game at Microsoft Canada’s X-Series event a little while ago, and we’re happy to say that we’re even more in love with this game than we were before!

Often, trailers highlight the very intense moments of a game, but not the realities of it. We see the biggest moments of a title, or perhaps the most intriguing, and the game ends up being a shell of those moments. Based on what we played, Tomb Raider is the same game we’ve seen in trailers and walkthroughs, and it’s incredible for it. Granted, we only played the beginning of the game, but it seems like there is a lot of quality stuff here, and it maintains that tone throughout.

The graphics in the game are beautiful sequences. The moment that really wowed us was when we looked at the sun cresting over the horizon, juxtaposed by multiple boat wreckages on the shores below. Other moments, like looking into lost footage from a video camera and recounting memories from just hours before really set the scene as sombre and terrified us in new ways.

Music certainly helped this feeling along, and while not over the top, the audio accompanies the gameplay in certain moments very well. There are subtle hints to certain moments as you play through while others feature crashes of drums and tribal thumping as you battle your way through a more intense moment. We’ve always thought of audio as one of the most important components of gameplay, far and above graphical prowess of a title, and the music in Tomb Raider doesn’t disappoint. 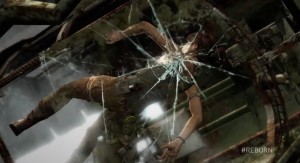 There’s a real sense of loneliness here as you’re not only on an island left to fend for yourself, but you can hear the screams of your friend on a radio that makes you feel even more helpless. Lara limps along, holding a wound in her stomach for most of the part that we played, and it gets more intense as the game progresses. There are small muscle movements in Lara’s face and body that make her frail and weakened state much more apparent. Her motions are human and fluid in a way that we’ve never seen before; they show vulnerabilities while still maintaining an action-hero feeling. It’s not easy to describe, but play the game, and you can’t help but instantly understand.

Of course, this vulnerable state doesn’t apply only to Lara. As you wield her bow and arrow, you have to find food, usually from live animals roaming the island. The sound of an arrow cracking open a buck’s skull is unique and memorable, but simultaneously terrifying. We couldn’t help but cringe for the animal, but smile at the realism and gore of what we’d just done. Similarly, when you die in Tomb Raider, there is no fading to black before you see anything gory. Lara can fall to her death, breaking her arms, or just as easily impale herself on a set of wooden spikes as she is swallowed by a river. This game has earned its mature rating. 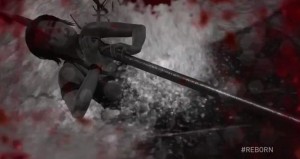 There are some wildly intense moments in the game, and unless this is just a very well-planned tease, it feels like the whole game maintains this sense of loneliness and terror. The game doesn’t hold a single punch, and it’s amazing to have Crystal Dynamics and Square Enix blazing new trails with a female heroine in these sorts of moments.

Tomb Raider is one of the most exciting games we have had the opportunity to play in the last few months, and it is one of the titles kicking off an incredible month of gaming when it launches on March 7th.