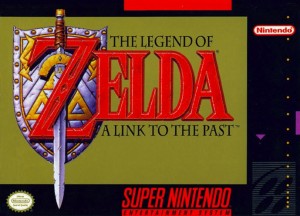 I was six years old when I picked up my first game controller. While I didn’t know it at the time, I owned probably one of the best games anyone could experience as a kid, The Legend of Zelda: A Link to the Past.  I’ll never forget the gripping opening music, the way the golden triangles formed into the triforce, the way my family fought over the game, the unsettling dungeons, and the enormous boss battles. I never once imagined that this game would one day inspire me to do so much more with my life and help me live a once silly little dream of becoming a game blogger. Hell, who knows if I’d even be writing this column if it wasn’t for that moment?

Nostalgia can sometimes get in the way of the actual quality of a game, and for a long time I struggled to figure out what was and wasn’t worth my time and attention.  After becoming a game blogger it became even harder trying to figure out how to properly evaluate a game without prejudice.  Sure, A Link to the Past was great as a kid, but did it live up to its name years later?  It wasn’t until a replay that I realized it wasn’t just the nostalgia that had gotten to me.  The game was just that good.

In fact, A Link to the Past is probably one of the finest examples in the series.  That’s a big statement considering how many amazing games there were, whether it was the much-coveted Ocarina of Time, the surreal Link’s Awakening or the lush Wind Waker. But A Link to the Past somehow felt the most complete in story, world, and exploration.  That tinge of mystery never faded either, and that feeling of accomplishment yet uncertainty is one of the winning factors of this game.

A Link to the Past has a way of stimulating emotions in such a way that even the slightest change in environment can create a whole new tone to the game. Whether exploring the Lost Woods, Death Mountain or the Village of Outcasts, each location had it’s own story worth telling and each felt ominous in a very lonely, mysterious kind of way.  A Link to the Past offered something subtle, yet extremely profound. 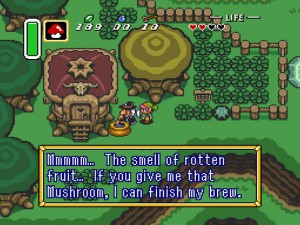 Even the action-adventure gameplay wasn’t quite so typical.  There was no one elite item, with each serving their own, unique purposes throughout the game.  Sometimes, the only way to uncover some of A Link to the Past’s most juicy secrets was by using several of these items in unison.  Items like the Magic Cape, Hookshot, Ether Medallion, Magic Mirror or the Bug-Catching Net each had their own presence worth discovering.  There are plenty of games that follow this system, but very few let you appreciate every last one of them.

The graphics are also something to appreciate, no matter how modest they may seem compared to today’s standards. Having been released during the early stages of the Super Nintendo, A Link to the Past’s 16-bit graphics were colourful and impeccably detailed despite the limitations.  That attention to detail helped the Light and Dark worlds feel vast and full of possibilities.  The game’s music fell down a very similar path, and was both simple yet complex all at the same time.  The soundtrack was beautiful, disturbing, accomplishing and constantly unpredictable.

The Legend of Zelda: A Link to the Past still remains one of the most inspiring games to date. The well-rounded experience is hard to beat and the amount of emotions the game encompasses is enormous.  I feel so lucky to know that this was my first experience in gaming, and that I was so willing to relish each and every moment of it.  I hope you do, too.