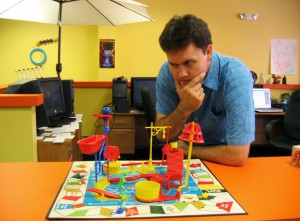 Jesse Schell, industry analyst and Puzzle Clubhouse CEO, gave a presentation at DICE 2013, where he asserted that companies who release game demos before the launch of their titles could be cutting their sales in half.

He shows that games with trailers and demo sell better than those without them, but that games with only a trailer (and no demo) sell at a rate about double those. It seems a bit counterintuitive, especially as companies like Sony are going free-to-try on almost all their games, especially with the advent of the PlayStation 4.

But Schell does make some good points, noting that while the game demos seem like a great way to strum up interest, it really can kill someone’s desire to play the game. Without a game demo, “you’ve gotta buy it if you wanna try it,” he says.

Have a watch of his presentation because he does bring up some excellent points. Whether or not the facts are true or he’s basing the data on a smaller sample of a niche market of games, for example, is unseen, but there are other awesome gaming-related tidbits of info in there that we think you’ll like.

We’d give you a preview of the video, but that might go ahead and cut our views down by half.