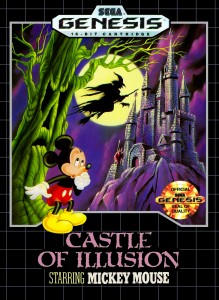 It would appear that the Disney Vault doesn’t solely hold movies anymore! Joining the recent announcement of Ducktales Remastered, an HD revamp of NES classic, Ducktales, coming to Xbox Live Arcade, the PS3’s PlayStation Store and the Wii U eShop this Summer, is the confirmation of another highly beloved retro Disney game getting a touched-up re-release, this time from the Sega camp! While it was released for the Sega Master System and Sega GameGear, Castle of Illusion Starring Mickey Mouse is best known for its immensely acclaimed Sega Genesis edition, which will be updated with some slick new high-definition visuals, and is also planned for release in Summer 2013. It will be coming to Steam, Xbox Live Arcade, and the PS3’s PlayStation Store.

The game was a seemingly simple, deceptively difficult 2D platformer that was put together in-house by Sega back in the 90’s. Sega is once again handling the HD re-release, bringing along the original game’s director to oversee production once again! Nothing else concrete is known in the way of any potential extra features, beyond the new graphics and the inevitable addition of achievements/trophies to earn, but needless to say, longstanding Sega loyalists were no doubt ecstatic at the news!

The one-two punch of Ducktales Remastered and Castle of Illusion HD being released in such close proximity to one another could signify an olive branch to longtime gamers. They were considerably wounded by Disney’s recent decision to close beloved and longstanding game developer, LucasArts, after only recently acquiring it along with LucasFilm. This also led to the cancellation of the highly anticipated Star Wars game that the studio was hard at work on, Star Wars 1313. Clearly, Disney wants to show that they still care about the gaming community, and what better way to do it than to give these vintage gaming classics new life on HD platforms?

Castle of Illusion has recently enjoyed renewed awareness in the gaming community, thanks to last year’s well-received Epic Mickey: Power of Illusion on the 3DS. This game acted as a sequel to Castle of Illusion, developed by DreamRift this time, featuring similar gameplay and a return to the titular setting of the Sega game, incorporating it into the Epic Mickey universe’s world of forgotten Disney creations. Like the original game, it involved the evil witch, Mizrabel luring and trapping Mickey inside her illusion-filled castle. While Mickey’s objective was solely to rescue Minnie in the original game, the 3DS follow-up ended up incorporating a hefty chunk of Disney characters from all across the studio’s long history as captives.

We’re always in favour of a hot retro re-release, so you can bet that we’ll have more coverage on this one! In the meantime, be sure to check out the brief, but compelling reveal teaser for Castle of Illusion HD online. It’s gorgeous! In fact, while you’re at it, look up the Ducktales Remastered trailer too, if you haven‘t already. That one even has a sing-a-long incorporated! No, you still can’t get the damn theme song out of your head after hearing it, but why would you want to?

In any case, it’s going to be a good Summer for Disney fans with a taste for retro gaming!