As if we were going to resist that kind of headline! Anyhow, things don’t get much more direct than photographic evidence, and in case you were somehow still doubting that Jamie Foxx was indeed portraying Electro for next year’s sequel to The Amazing Spider-Man, photos of the actor in costume have leaked online. We’ve managed to snatch up one of these photos, and here it is: 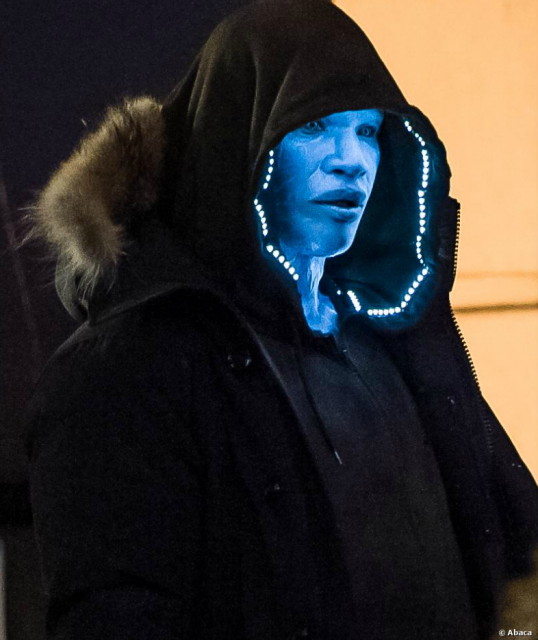 What do you think? True to Foxx’s word, the design isn’t based off of the (rather ridiculous-looking) classic comic costume, complete with green and yellow spandex topped off with a rather tacky electricity-styled mask. Instead, rumours of the design taking more after Marvel’s Ultimate Universe variation of Electro seem to be true. As in the rebooted comic continuity’s offerings, Electro is now a blue-skinned manifestation of living electricity, rather than a dork in a costume who simply manipulates electricity. While it’s still unclear exactly how Electro gains his powers in the big screen sequel, it’s probably not going to go down the way it did in the classic 1960’s comics; With electrical engineer, Max Dillon getting struck by lightning while working on a power line. In real life, that would kill you pretty badly, and you can quote us on that! 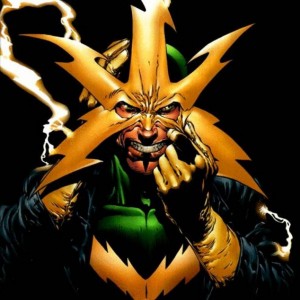 As expected, much of the villain’s story in the movie is being kept under wraps. Foxx has revealed however that Max Dillon begins as a ‘nobody’ that idolizes Spider-Man, presumably taking his villainous turn when a would-be partnership with the web-slinger doesn’t go his way. It’s unclear whether the filmmakers will be borrowing any of Electro’s backstory from the funny pages, specifically his occupation. Still, considering that their portrayal of The Lizard in the The Amazing Spider-Man was reasonably faithful in backstory to the comic counterpart, conservative Marvel fans probably need not worry too much, even if the filmmakers will no doubt need to come up with a new explanation for Electro’s abilities. One thing’s for certain; Electro will likely be a more cerebral villain for Spider-Man, since Spidey can’t actually directly harm Electro with his own fists and webs. Clearly, Peter’s going to have to get creative against this baddie!

The Amazing Spider-Man 2 is quickly shaping up to be one busy sequel! Classic Spider-Man characters, Harry Osborn (played by Chronicle’s Dane DeHaan) and Mary-Jane Watson (played by The Descendants’ Shailene Woodley) are confirmed to be joining the movie, while Oscorp boss, Norman Osborn will finally show up in the flesh, portrayed by Chris Cooper, and almost certainly pre-Green Goblin transformation. Paul Giamatti and Felicity Jones have also joined the cast in secret roles, with rumours pegging Giamatti as Aleksei Sytsevich (who becomes Spidey villain, The Rhino) and the latter as Spider-Man’s kinda-sorta-partner-in-crime, Felicia Hardy, a.k.a. Black Cat. Ironically, both Rhino and Black Cat were featured in The Amazing Spider-Man’s video game adaptation, which acted as an unofficial sequel to the movie, though considering that Rhino was a cross-species mutant and Black Cat was a violent bank robber, we’re inclined to think that the actual movie sequel would go in a different direction with these characters!

Sure, this hearsay with Giamatti and Jones could all just be an elaborate misinformation campaign orchestrated by returning director, Marc Webb, especially considering the rate that Webb has aggressively been tweeting and teasing from the set! He’s even teased that The Amazing Spider-Man 2 may start setting up a story arc not just for Green Goblin, but also for Venom, one of Spidey’s greatest foes, whom fans felt was portrayed rather poorly in 2007’s ill-received Spider-Man 3. Like we said, it’s shaping up to be a busy sequel!

We’ll see if all of these balls can effectively stay in the air when The Amazing Spider-Man 2 hits 3D and 2D theatres on May 2nd, 2014!