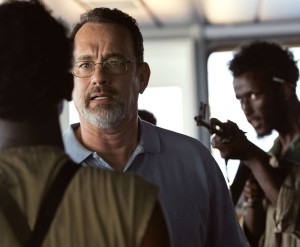 Director Paul Greengrass (The Bourne Supremacy, Bloody Sunday) has given Hanks the role of Captain Richard Phillips, a real-life captain who went through a horrific hijacking of a Maersk cargo freighter in 2009.

The trailer for the film is nothing short of stunning, especially considering what happens in the film happened in real life to this man and his crew. The events are recounted in extreme detail in the film and what you will see may even shock you.

We’ve long been a fan of Paul Greengrass and his directing style since Bloody Sunday and even more so with The Bourne Supremacy and The Bourne Ultimatum. Captain Phillips looks to follow an eerily gritty tone as well.

Let us know what you think of the trailer and Tom Hanks in this real-life thriller!