During the previous decade, the 2006 movie adaptation of The Da Vinci Code, adapted from the Dan Brown novel of the same name, started something of a controversy in the religious community. This controversy is one of the main reasons why the movie became a huge surprise hit for Sony Pictures, and a very unexpected franchise opportunity, to the point where The Da Vinci Code even received its own video game adaptation! After The Da Vinci Code went on to become one of the most absurdly profitable movies of 2006, Sony went back to make a movie out of the prequel novel that they initially skipped, Angels & Demons, which still turned a tidy profit, though not as much as its predecessor. That was seven years ago, and this time gap has unfortunately given moviegoing audiences plenty of time to realize a very unfortunate truth; The Dan Brown stories are actually kind of absurd when you really think about it. 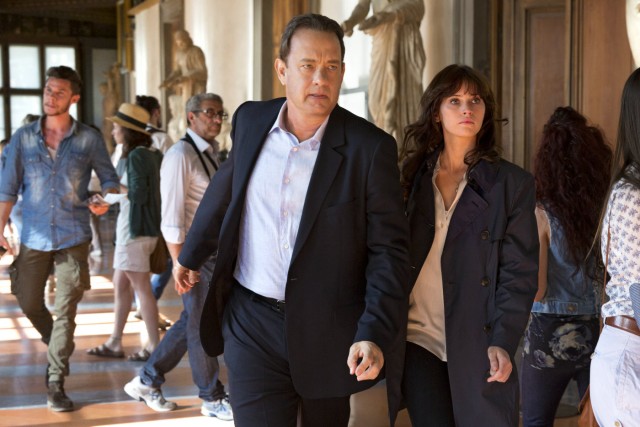 That truth very much hangs over the overdue third installment in this religious conspiracy-themed film franchise, Inferno, the fourth novel in Dan Brown’s Robert Langdon saga, with Sony apparently skipping the third book in the series, The Lost Symbol. Tom Hanks is back as Langdon, and Ron Howard is back in the directors’ chair, but neither is enough to redeem the fact that Inferno has officially crossed the threshold of unforgivable ridiculousness for these movies. Simultaneously agonizingly boring and head-slappingly stupid, Inferno is the final nail in the coffin for a movie series that people already didn’t give that much of a hoot about once they put together that the scholarly flavour was merely hocus-pocus. This debacle is ultimately a pretty clear indication that perhaps the big screen incarnation of Robert Langdon should just retire after this.

Tom Hanks’ Robert Langdon is given a bit of a twist this time, as he begins the movie with amnesia, having suffered a mysterious blow to the head. Immediately, this hurts the movie, since the one thing that Langdon is good for, quickly deducing impossible solutions to ludicrously hidden symbology-themed and mythology-themed puzzles, is taken away, leaving Langdon as a bumbling, confused nincompoop. In fact, it seems like the script realizes this early on too, since the movie eventually just ditches this amnesia idea entirely, in favour of another by-the-book Langdon treasure hunt that would never actually unfold in real life.

With Hanks playing the same role exactly as it was across two previous movies, the real performance standout is actually Felicity Jones as Hanks’ latest attractive brunette sidekick, Sienna Brooks, a nurse that happens to be present when Langdon is hunted by an assassin within a hospital in Florence. Yes, seriously. Sienna is a symbology enthusiast with a particular love of Dante’s Inferno, the first third of Dante Aligheri’s epic poem, The Divine Comedy, which just so happens to contain the main puzzle that Langdon and Sienna have to solve to save humanity. Yes, no less than humanity itself is at stake in Inferno, with this third movie stretching the scale of the franchise far beyond the means it can cover, which further destroys the credibility of the already-faulty storyline.

There are several other characters of note in the movie, but it’s difficult to talk about any of them without giving away key story spoilers. Almost all of them serve as mere plot devices though, simply doing as the script demands, without much real personality or credible motivation to speak of. Even Ben Foster’s transhumanist cultist mastermind (yes, seriously), who serves as the architect behind this potentially cataclysmic disaster that Langdon and Sienna are trying to work against, dies in the first few minutes of the movie (even the trailer reveals this), and contributes nothing beyond a biologically impossible super-virus that’s hidden somewhere, with the location conveniently hidden in an artists’ depiction of Dante’s Inferno. Because of course it is. 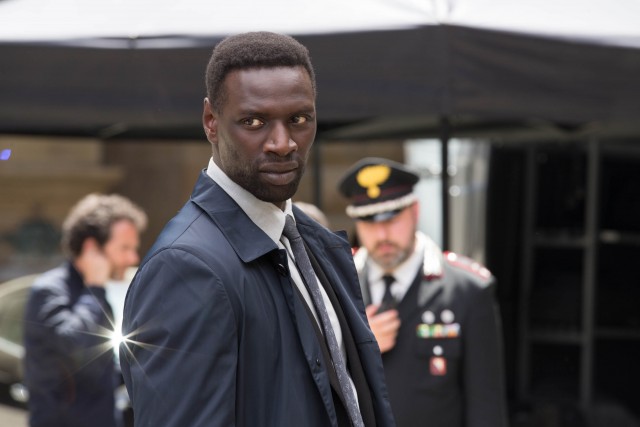 The only actor that’s truly of note in terms of performance and appeal beyond Hanks and Jones is Irrfan Khan, who plays another key player in events that quickly becomes lost in a mess of tangled, convoluted plot threads that don’t effectively go together. Khan might as well be an exposition fairy when all is said and done, since he often serves as the overseeing Deus Ex Machina force that makes sure Inferno doesn’t careen head-first into a wall, or at least tries to do that. Khan classes Inferno up a bit more when Hanks fails to, but he still can’t fix the fundamentally bonkers storyline that dis-services his character as much as anyone else’s.

The main thing taking apart Inferno at the seams is its terrible storyline, which is an absolute mess from top to bottom. The Da Vinci Code had sort of a cool conspiracy idea that doesn’t totally hold up to scrutiny, and Angels & Demons seemed fairly out there, but still semi-believable, if you squint. Inferno however feels like the crooked ravings of a madman, being so far removed from reality that it might as well take place in a comic book. Hell, even this year’s comic book movies feel somehow more credible and realistic than Inferno, which feels like some sort of twisted accomplishment, were it not a massive testament to how aggressively idiotic this movie is!

Where to even begin dissecting this. Well, first, like I said, Inferno is incredibly boring, lacking the intrigue of The Da Vinci Code or the excitement of Angels & Demons pretty much completely. The movie plods along at a very dogged pace, despite half-hearted attempts at action and thrills, though when the action is unfolding around such a stupid storyline that’s nonetheless taking itself way too seriously, it’s really difficult to invest in anyway. Even the climax for the supposed fate of humanity feels too absurd to truly care about at all, with the entire conflict feeling both too impenetrable and too convoluted, quickly causing Inferno to collapse under the weight of its own ridiculousness.

That’s before the genuinely incredible amount of misinformation, fear mongering and pseudoscience that Inferno crams down audiences’ throats too. Even with merely a high school diploma, it’s incredibly easy to spot how much this movie woefully misunderstands everything from demography to economics to history to theology to medicine. It’s really quite shocking just how much this movie gets wrong about the fields of study that it builds itself around, and I imagine that actual experts in these fields will probably experience the entire affair with their palms across their faces. Langdon is supposed to be the thinking man’s action hero, but in Inferno, his latest mess will actually just make you feel dumber.

Ron Howard remains just as committed to helming this franchise as Tom Hanks is to starring in it, but Howard really went off the rails with Inferno. Howard is normally a great director, but for some reason, his direction just seems confused and sloppy in this movie. The heavy-handed use of disturbing hellish imagery that chokes the first act most notably is somewhat effective at first, though soon after becomes unintentionally hilarious, before just becoming plain annoying. Even after Howard finally abandons that idea, the rest of the movie feels like it’s phoning in the same old song and dance for Robert Langdon, only this time with half the energy and inspiration.

I get that Howard was perhaps going for a more immersive style of directing in Inferno, perhaps trying to replicate Langdon’s injured mind, and trying to leave audiences as confused and frightened as Langdon initially is. It’s an interesting idea, but it doesn’t really work in practice, and eventually, the movie just awkwardly abandons this hook, in favour of going back to a tired thriller style. Even the action just seems apathetic here, feeling unpolished and clunky, as if Howard gave up on the movie halfway through directing it.

Surprisingly though, the IMAX cut of Inferno is actually not bad, adding a fair degree of scale, immersion and polish to what’s otherwise a very boring and unintelligent thriller. The movie is also available in 3D in certain international territories, but the 3D cut doesn’t seem to be available in most or any domestic regions, so I can’t comment on it. I can’t imagine how 3D would benefit this movie though, outside of the overdone, annoying religious imagery in the opening act, even if the IMAX presentation is actually pretty good. It’s just too bad that the movie itself isn’t very good, offering another selection of pretty European locations, and not much else to go with that. You can also get plenty of pretty European locations in no shortage of far better movies that are actually worth your time though.

Inferno is an insane Robert Langdon threequel for all the wrong reasons, being asinine where it should be shocking and being limp when it should be engaging. Beyond the pretty exterior, which gets even prettier in IMAX, there’s just nothing appealing about this overdue follow-up, which was perhaps better off not existing. Fans of the source novel may be pleased to see that the movie is mostly faithful to it in the first half, but the second half makes some ill-advised changes to the story, seemingly by studio mandate, which attempt to make the movie more exciting, but only succeed at making it even more brainless and idiotic.

Even hardcore fans of the Robert Langdon character or Dan Brown’s novels will probably be disappointed by this film adaptation of Inferno, which doesn’t truly do justice to its source novel (after the book already received mixed reviews from critics), and at worst, outright insults it. The handful of good ideas in the book are translated very poorly to the movie, and the result is a mess of a sequel that unfortunately amounts to yet another high-profile disaster for the increasingly unfortunate Sony Pictures, who have misfired on just about every large-scale blockbuster they’ve attempted so far this year, oddly profiting a lot more off of dark horse hits like Sausage Party and Don’t Breathe.

If you must complete the trilogy of Robert Langdon movies, then I’d wait for Inferno to become available for a home viewing rental before indulging in it, preferably when you have a group of buddies there who can laugh at it with you. There are some moments of ‘so bad, it’s great’ ironic entertainment in Inferno, but not enough to justify a movie ticket, especially an IMAX ticket, for those handful of chuckles within a movie that is often so self-serious and dull, in spite of its flailing alarmism. For most though, Inferno is another disappointing 2016 blockbuster that you’re better off skipping. Langdon’s adventures may still be continuing in books, but unless Sony can radically turn around the state of its movie franchise, this professor’s big screen counterpart should probably just stick to his day job from now on.

Inferno Review
Inferno is unrepentant in its stupidity, unforgiving in its boredom, and far too late to the party, merely serving as the final nail in the big screen Langdon saga's coffin.
CHARACTERS45%
PLOT30%
DIRECTION45%
THE GOOD STUFF
THE NOT-SO-GOOD STUFF
2016-11-03
40%Overall Score
Reader Rating: (1 Vote)
100%