After rebounding very well last week, Arrow more or less stayed on a pretty good note in this week’s episode, “Human Target.” As the title suggests, this episode was anchored around introducing DC Comics’ bullseye-for-hire, Christopher Chance, a.k.a. Human Target, who previously had his own series on FOX at the start of the decade, and has popped up in several stories across the main DC Comics Universe, as well as his own separate tales chronicled within DC’s Vertigo imprint of graphic novels. Chance also happens to be portrayed by Wil Traval for his DC Television Universe incarnation, who already has a high-profile gig on Marvel’s Jessica Jones as Will Simpson/Nuke, making this character’s appearance especially exciting for fans of comic book-inspired television!

As much as Human Target played a key part in this episode though, his debut felt overshadowed by the other storylines at work, which nonetheless led to another strong episode this week. The only very noticeable story hiccup this week came when the team managed to reclaim Wild Dog fairly easily, despite Tobias Church torturing him and then forcing him to dig his own grave, with Church unrealistically running off after Oliver finally closes in on him. This leaves Wild Dog to conveniently confess that he cracked under duress, and told Church that the Green Arrow is Oliver Queen, a crack that, surprisingly, has little consequences. I suppose that Oliver understands being tortured better than most though, in fairness. 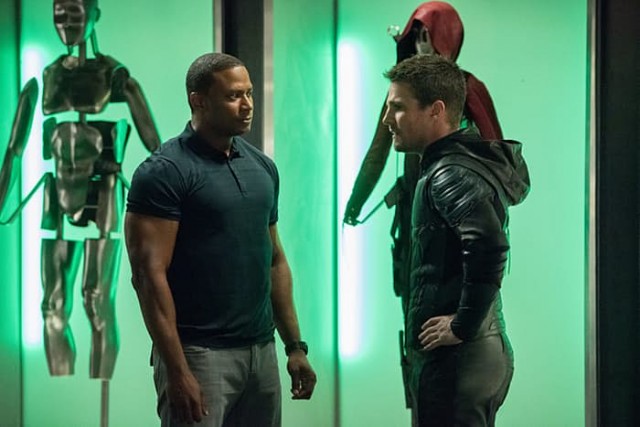 This blab of Oliver’s identity predictably poses a problem, but it also represents a chance for an interesting character evolution for Diggle, as he is tasked with helping Wild Dog deal with his guilt and grief from being tortured, and compromising his leader. This was a very inspired way to restore Diggle’s dynamic with the whole of Team Arrow in its new form, as Diggle takes on an effective mentorship role, and one that also has him further confronting his own guilt and grief over having to kill his brother last season. Diggle being a fugitive currently makes him a full-time assistant to Oliver and the team, and for now, this works, especially since Diggle finally suits up as Spartan again in this episode, complete with a new helmet that looks a lot better than his old one from Season Four!

This episode also provides something of a climax for the Tobias Church arc as a whole, with his endgame being revealed as trying to consolidate the city’s competing drug operations under one banner, utilizing Star City’s easy water access in the large bay area by the city. This seems to fully cement that Star City is more or less substituting for San Francisco in the DC Television Universe, as with the most recent accounts of Star City’s location from DC Comics canon, though this seems to throw out the previous evidence that Star City was somewhere in Iowa (even though its proximity to Coast City, which is frequently the DC Universe version of Los Angeles, now makes more sense), and now creates a plot hole for the DC Television Universe, since The Flash’s Central City is allegedly in place of Cleveland, Ohio in this universe, yet is somehow only 600 miles away from Star City? Well, whatever. It’s not like the DC Universe can ever make up its mind about where its fictional cities are located in any medium, at least beyond Smallville, which always seems to be in Kansas. 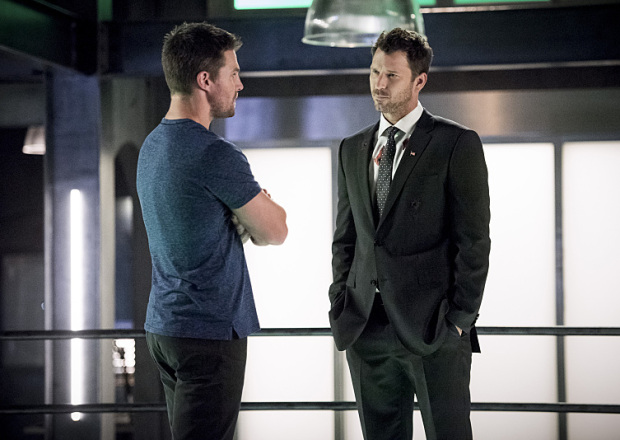 That’s a nitpick though, so whatever, Star City is San Francisco in this universe. Fine. In any case, Oliver utilizes the Human Target to trick Church into thinking that both the mayor and the Green Arrow are dead after Chance poses as Oliver before Church’s assassin shoots him, the one key instance where Chance shines best, and this allows the vigilantes to go after Church when he’s got all of Star City’s drug kingpins in one convenient location. A small fight breaks out, which gives us more quality action while it lasts, and offers a particularly tense final duel between Oliver and Church, before Oliver subdues Church, and finally puts him on the path to Iron Heights Prison. At last, Tobias Church has been taken down!

With Tobias Church’s fall comes the rise of Prometheus as well, as Prometheus resurfaces to express frustration at Church beforehand for continuing to aggravate the Green Arrow, even nearly killing him, before his Deathstroke knock-off henchman (is this supposed to be another Ravager?) takes the hit for Church. When Church is captured and on the way to Iron Heights, Prometheus visits the cop escort and murders literally everyone, before Church tries to give up Oliver’s name in a desperate bid for survival. It doesn’t work though, and Prometheus tosses what looks like a shuriken into Church’s throat, killing him. It’s kind of surprising that the show would kill off Church this early, but I will say that Church’s story was wrapped up well, and the stage is nicely set for Prometheus to take over as what’s hopefully a better over-arching villain for the series’ latest season. Arrow hasn’t managed a truly standout big bad since Deathstroke back in Season Two (even though Damien Darhk was at least pretty fun last season), so I’m hoping that Prometheus rises to the occasion!

There’s a couple of other events in this episode, and they mostly offer more appealing character work. It’s pretty cool to see the disguised Human Target do things like take down a political opponent of Oliver’s and even get Susan Williams’ phone number for him, though this doesn’t amount to much when Susan gets ahold of evidence that Oliver was affiliated with the Bratva before his return to Star City in 2012. Speaking of the Bratva, the flashbacks actually found a solid way to bring around the Human Target debut, since it turns out that Anatoly hired Human Target to protect Oliver from a fellow Bratva agent that tried to kill him, unbeknownst to Oliver (it’s Diggle that Chance apparently has history with), who learns that Kovar is no longer his only concern. The flashbacks didn’t move very far forward this week, but the way that Human Target was incorporated into them was fairly decent, if a bit unnecessary.

“Human Target” was another very good episode for Arrow, and one that concluded the Tobias Church arc in style. The titular ally more or less functioned as little more than a cool Deus Ex Machina for the heroes, but at least he still worked to further Oliver’s mayoral arc pretty well. The idea of Diggle taking on a mentorship role for the new recruits is also an inspired one, providing a carrot to Oliver’s stick in a clever way, and a way that makes more sense than if Felicity took that role. The team did reclaim Wild Dog a bit too easily though, plus the episode also awkwardly tossed in Oliver learning about Felicity’s new boyfriend, Billy Malone, right as he’s about to join the ACU. This felt shoehorned into a fairly busy episode, and there was never any chance for an effective conflict to gel between Oliver and Felicity over this. Nonetheless, Arrow’s fifth season is starting to find a healthy groove, and the show is so far on the path to greener pastures, so to speak. It just has to be concerned with keeping that up now!