For all of its eccentric presentation about the world of professional mascots, the latest Netflix Original Film, aptly titled ‘Mascots‘, feels weirdly familiar. The movie comes to us from actor and director, Christopher Guest, who has made a name for himself in helming several biting satires done in a mockumentary format, all of which have received huge critical and audience acclaim. There have been three such projects in the past, between 1997’s Waiting for Guffman, 2000’s Best in Show, and 2003’s A Mighty Wind, with Guest now revisiting his mockumentary playbook over a decade later with the advent of Netflix, and thus, we now have Guest’s fourth mockumentary offering, Mascots.

Considering the huge time gap between A Mighty Wind and Mascots though, it’s perhaps unsurprising that Guest feels like he’s trying to remember how to do a beloved party trick with his latest directing effort. Guest is very good at that party trick to be sure, but he seems either out-of-practice, or excessively falling back on well-worn conventions for his overdue 2016 release, since Mascots is good enough, but it is indeed overly familiar and strangely predictable in many respects. There’s still plenty of weird, memorable spectacle in Mascots, and longtime fans of Guest’s work will still find plenty to enjoy in his latest offering, though if this is your introduction to Guest’s inspired mockumentaries, you might find it to be a far less potent gateway drug than his prior three mockumentaries are.

Mascots has quite the ensemble cast behind it, as it spotlights a competition of professional mascots competing for the coveted Golden Fluffy award, which proves who has the best and most likable mascot routine in the world. Among the competitors are tenuously-married husband-and-wife combo, Mike and Mindy Murray, played by Zach Woods and Sarah Baker, respectively, struggling British mascot successor, Owen Golly, Jr., played by Tom Bennett, thuggish, womanizing drunk Canadian, Tommy Zucarello, played by Chris O’Dowd, and alternative ‘artist’ mascot, Cindi Babineaux, played by Parker Posey. Mascots’ mockumentary format is all about exploring the weird, offbeat quirks of all of these personalities during the most exciting event of their professional lives, and it’s difficult to go into them too much without spoilers, since Mascots is best enjoyed when you know as little about it as possible.

Even then though, if you’re well familiar with the body of Guest’s directing work, you’ll feel like Mascots’ humour can be predicted at times, even when it goes into the realm of the genuinely strange. Jokes at the expense of furries and self-proclaimed ‘artists’ who are out of their element are naturally made, and some of these jokes do manage to be pretty funny, though it feels like Mascots is poking at its titular subjects exactly how the viewer would expect it to, despite how badly it wants to be subversive. The cast all does a great job however, with Tom Bennett and Parker Posey being particular standouts, and a group of judges that include legacy mascot champs like Jane Lynch’s Gabby Monkhouse and Ed Begley, Jr.’s A.J. Blumqist also offer several highlight jokes. Guest himself even makes an appearance in Mascots, reprising his former Corky St. Clair character once again as well.

I certainly wouldn’t say that the cast of Mascots is wasted, since the movie has more than enough eccentric charm to go around. The characters are also fairly well-developed, having strange, but lovable backstories that give them a series of separate motivations when it comes to striving for the Golden Fluffy. Getting to know these characters is great when it does manage to surprise viewers, but rather than feeling like fully-fleshed out folks, these personalities feel a lot like especially colourful archetypes, and that noticeably hurts the story. The jokes may still be funny when the cast delivers them, but it really doesn’t seem like these personalities will have the same staying power as those in Guest’s previous three mockumentaries.

Mascots doesn’t overstay its welcome, unfolding within a fairly speedy 89-minute runtime. It’s just too bad that the movie feels like a strangely by-the-book underdog tale that occasionally feels longer than it is, despite its enjoyable outer exterior of weirdness. It’s like a bland, tasteless cake that’s coated in especially delicious icing. There’s nothing outwardly bad or offensive about Mascots, but it also doesn’t bring any real new social insight to the table either. About the best message that the movie seems to be able to muster up is an overdone anthem to not underestimating the outwardly eccentric, and that feels like an anthem that Guest has already trodden extensively with his prior mockumentaries.

There’s certainly nothing wrong with the message of embracing people that you don’t quite understand, even if that’s a message that numerous other movies across numerous other genres have already been founded on in the past, but Mascots doesn’t feel like it aims quite as high as many of Guest’s prior works. It’s still fun, and it’s still funny, but it does feel more disposable than Guest’s prior mockumentaries. That’s too bad, since the kind of quirky insight that Guest is normally so effectively able to provide in his directing work feels like it’s a good fit for the more experimental original movies of Netflix.

Guest has got filming mockumentaries down to a finely-crafted science at this point, and that remains true in Mascots, a movie that blatantly has Guest’s fingerprints all over it. Newcomers will find Mascots to be enjoyably quirky and different from most other comedies, though if you’re already familiar with Guest’s mockumentary style, Mascots also doesn’t offer much in the way of directing flourishes that you wouldn’t have seen before. It doesn’t have quite the same degree of creative spark that was all throughout Guest’s prior three mockumentaries, even if it’s still a good time.

As I’ve said though, Guest still directs his cast very well, and seeing the characters actually perform at the Fluffies competition is something that is well worth waiting for. It’s not something that’s necessarily worth re-living over and over again, but there is a sense of fun and showmanship during this point at least, even if the lead-in sometimes feels a tad more bland, by Guest’s standards anyway. It’s all very by-the-book, and that’s almost disappointing, since Guest is a maverick that has almost never benefited from going by the book.

There’s disappointingly little to ultimately dig into in Mascots, and that feels downright bizarre from a mockumentary director that’s normally as creative and daring as Christopher Guest. When it comes down to it, Mascots is still at least a bit better than the majority of Netflix’s often shaky original film catalogue, but it’s no Pee-Wee’s Big Holiday either. If you enjoy Christopher Guest’s work, or enjoy eccentric comedies in general, then Mascots is worth a watch, even though I highly doubt that many viewers will come back to it after the initial viewing. 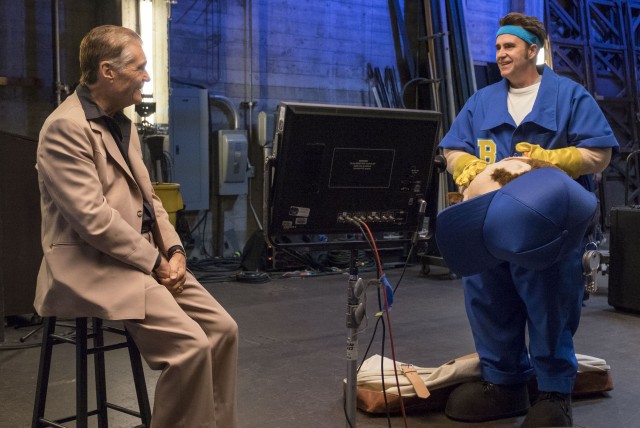 Mascots seems to have the unfortunate distinction of being Guest’s weakest mockumentary to date (even though it’s still far better than his perceived directing low point, 1998’s Almost Heroes), which may disappoint his fans, though I wouldn’t say it’s a bad movie. It’s just got something of a bland aftertaste, despite all of the reliably weird, quirky fun that is enjoyable for open-minded viewers in the moment. There’s heart here, even if not as much inspiration, and like the pleasant middling contenders of the Fluffies, you’ll find things to respectably chuckle at and clap for, even if there’s no way that you’ll see Mascots on any kind of podium.

Mascots Review
Mascots manages enough quirky, lovable charm to make it worth a watch for fans of strange comedies and Christopher Guest, but it doesn't have enough inspiration to stand with Guest's prior mockumentaries.
CHARACTERS70%
PLOT70%
DIRECTION75%
THE GOOD STUFF
THE NOT-SO-GOOD STUFF
2016-11-02
72%Overall Score
Reader Rating: (0 Votes)
0%