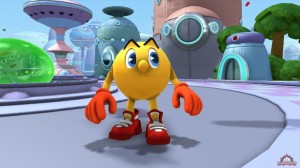 It’s been a surprisingly long while since we had a proper Pac-Attack. Despite Pac-Man being one of the most iconic and beloved arcade games (and arcade game characters) of all time, the ravenous round mascot of Namco has had trouble translating himself into the modern era. While tweaked and upgraded variations of the original Pac-Man arcade game continue to thrive stronger than ever on current gaming platforms, other modernizations of the character have proven far less successful, with the most recent, the highly underwhelming Pac-Man Party on Wii, being seen as a rather poor celebration of the character’s 30th anniversary, observed a year late in 2011.

Pac-Man is trying his hand at a modern reboot yet again this Fall, with a new CG-animated cartoon series, Pac-Man and the Ghostly Adventures, launching on Disney XD. Produced by Marvel Studios founder, Avi Arad, the cartoon is attempting to draw press by being one of the first high-profile new cartoons to be available in stereoscopic 3D, for those who own a 3D-enabled television. An initial twenty-six episodes are planned for the cartoon, but this is old news, as Pac-enthusiasts could already point out. What isn’t old news however, is that the cartoon is getting a simultaneous game tie-in, also called Pac-Man and the Ghostly Adventures, launching this Fall for PC, Xbox 360, PlayStation 3 and Wii U. A redesigned 2D side-scrolling version of the game is also being released for 3DS.

Like the cartoon, the game will follow the adventures of Pac-Man, now envisioned as a teenager coping with adolescence along with his buddies, Spiral and Cylindria (hey, it might be better than it sounds), as he defends PacWorld from the threat of ghosts, led by the evil Betrayus. Betrayus’s lieutenants even happen to be Inky, Blinky and Pinky, three of the ghosts from the famous arcade game. The fourth ghost, Clyde however, is currently unconfirmed, as is Sue, Clyde’s female replacement that joined Inky, Blinky and Pinky in sibling arcade game follow-up, Ms. Pac-Man. 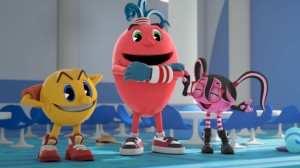 Details on the game are currently thin, though it appears to be a three-dimensional platformer with beat ’em up elements. Pac-Man also has the ability to transform into new forms, as illustrated in the game’s debut trailer, when he turns into a dinosaur-like form that bears more than a suspicious resemblance to Nintendo’s iconic dino, Yoshi. It even has a long tongue that’s used for both combat and exploration, allowing Pac-Man to swing on outcroppings to reach faraway ledges. We suppose that as long as Pac-Man isn’t turning into any red or green-clad plumbers, there doesn’t have to be a copyright-related Pac-suit.

Regardless, Pac-Man collects pellets and chomps ghosts in much of the gameplay footage, where he’s also shown as being something of an amateur too. He lands flat on his face during one particular aerial stunt, and even just lets a civilian get trapped in some green gunk too. Well, that’s not very responsible! This is likely in keeping with the cartoon, which seems to be depicting an adolescent Pac-Man first beginning his journey into becoming a ghost-chomping hero. Perhaps the idea of learning such a hefty amount of Pac-Man’s pretty well completely ambiguous backstory is enough to get gaming enthusiasts both tuning in to the show, and playing the new game. Maybe we’ll even learn how he met Ms. Pac-Man?

The game may not appear to be anything complicated, but the trailer footage does seem to at least indicate plenty of bright and appealing graphics in the console and PC builds, likely with some exclusive Gamepad functionality being featured in the Wii U edition. Pac-Gods willing, we may actually get a decent Pac-Man game here… Hopefully. At the very least, the initial first look seems to indicate that Pac-Man and the Ghostly Adventures has some decent production values behind it. Being a cartoon tie-in, it would be easy to accuse the game of being a cheap cash-in effort, but we here at Eggplante are optimists, and we’re going to hope that this could indeed be Pac-Man finding his footing in a modern setting!

This isn’t the first time that a new television series has attempted to court geek audiences by simultaneously launching with a video game counterpart. Well-received Syfy series, Defiance started airing simultaneously with the release of an MMORPG tie-in back in April, with the game also being called Defiance, and releasing for the PC, Xbox 360 and PlayStation 3, with the Xbox 360 edition even incorporating Kinect support. Seeing as Defiance was recently confirmed for a second season, particularly after the game managed to draw a respectable crowd, hopefully Pac-Man and the Ghostly Adventures can find similar success, even if it does seem to be directed more at younger audiences.

We’ll be keeping an eye on this latest attempt to stir the second coming of worldwide Pac-Man Fever! In the meantime, Pac-Man enthusiasts can expect to see just how well this experiment in cartoon and gaming media performs when Pac-Man and the Ghostly Adventures debuts its animated series and releases its video game in the Fall!