The Summer of 2015 continues to strive for being the best Summer at the movies ever for the likes of geek audiences! Even video games aren’t being left out of the fun, since it was recently confirmed that a Ratchet & Clank movie would be coming to theatres for Summer 2015, joining juggernaut blockbusters like The Avengers 2 and Star Wars: Episode VII most notably. It would appear that 2015 may finally be the year that video game-to-movie adaptations start gaining more serious momentum, as 20th Century Fox and New Regency have also just made the announcement that the long-in-development Assassin’s Creed movie, inspired by Ubisoft’s ultra-popular series of action games, has been set for a big screen release on May 22nd, 2015!

This is a gigantic vote of confidence from Fox and New Regency, who are also working with Sony Pictures on the ambitious big screen adaptation, since the Memorial Day weekend is one of the most contested and turbulent box office weekends of the entire year! It’s often reserved for only the most anticipated of cinematic blockbusters, or for multiple guaranteed moneymaking sequels to duke it out, as is the case with this year, where Fast and Furious 6 and The Hangover Part III will square off for box office sales. The fact that a video game-inspired movie was authorized for release on this chaotic weekend is huge for video game-to-movie adaptations, often publicly maligned and dismissed by both avid moviegoers and gaming enthusiasts alike, for their frequently dumbed-down storylines and over-emphasis on ludicrous action. It would seem that studios are starting to take more risks with trying to fully realize a video game-inspired blockbuster, more confidently backing these projects, since this is the first time that two video game-inspired blockbusters are both releasing during the same Summer season! It’s also the first time that a video game movie has gotten this kind of high-profile backing since Disney released their movie adaptation of Prince of Persia: The Sands of Time in late May 2010 (also inspired by a Ubisoft game), a movie that performed merely modestly in North America, but was a huge box office success in international territories!

While the Assassin’s Creed movie currently has no director or cast, beyond X-Men: First Class and Prometheus star, Michael Fassbender being cast in the (currently undisclosed) lead role, it has been previously confirmed that the studio plans to release the movie in 3D. The initial draft of the script is being written by short film writer, Michael Lesslie, with a rewrite or two probably to be determined after a director and more actors are chosen. It’s currently unconfirmed whether the movie will follow any specific time period or particular game in the Assassin’s Creed series, which features entries set during The Crusades, The Renaissance and The American Revolution most prevalently, or whether it will invent a new setting and new characters entirely.

Beyond that, it’s very likely that the movie will maintain the franchise’s backbone conflict, a centuries-long battle between the secretly-enduring Knights Templar, and the Order of Assassins that stand to thwart their efforts securing holy artifacts. If the movie is consistent with the mainline games, it will follow a modern protagonist in the present day, hooked up to a machine called The Animus that extracts genetic memory, allowing the host to re-live events in their ancestors’ lives, which allows Assassin’s Creed to easily switch protagonists between eras. Seeing as the modern end of the saga worked in the (now definitively proven untrue) 2012 conspiracy however, it’s likely that the movie will need to take liberties with the source material in order to make sense during a release in 2015. 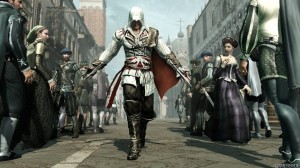 The fast-tracking of the Assassin’s Creed movie is consistent with Ubisoft being by far the most aggressive game publisher when it comes to adapting their game properties to the big screen. They’ve created an internal division dedicated entirely to this purpose, which has also started development on movies related to Raving Rabbids and Ghost Recon, at least, as far as public confirmation goes. The furthest Ubisoft game-inspired movie in development by this initiative besides Assassin’s Creed however is Splinter Cell, which has already cast Inception and The Dark Knight Rises star, Tom Hardy in the lead role of Sam Fisher. It’s still currently without a release date or crew however. This goes with Ubisoft-inspired Prince of Persia: The Sands of Time being one of the most ambitous and successful video game-to-movie adaptations to date, perhaps contested only by 2001’s Angelina Jolie-starring adaptation of Tomb Raider. Before that however, another Ubisoft property was adapated to film first, that being Far Cry, for international release in 2008 by infamous schlock director, Uwe Boll. Predictably, Ubisoft was in no way involved. The Far Cry movie received tepid feedback, particularly due to how little it had to do with the source material. Thankfully, Boll isn’t going anywhere near the highly promising Assassin’s Creed adaptation!