It’s hard to imagine that somebody thought that what is arguably F. Scott Fitzgerald’s most celebrated literary classic would be Summer blockbuster material. Well, apparently Moulin Rouge! and Romeo + Juliet director, Baz Luhrmann did, since the movie was even moved away from an initial Holiday 2012 release window, to instead release in early May of this year, smack between guaranteed moneymaking juggernauts, Iron Man 3 and Star Trek into Darkness. Now, this latest cinematic re-telling of The Great Gatsby fancies itself bombastic and sexy enough to compete with the big screen bruisers of established franchises and followings, but hey, I’ll say this, it actually doesn’t do too bad a job! The movie is far from perfect, and literary purists will no doubt be bothered by Luhrmann’s liberal tendency to throw in so many sexy flapper parties, and layer the soundtrack with multiple levels of Jay-Z, but if you’ve enjoyed Luhrmann’s work before, or have a love of costume dramas, The Great Gatsby will entertain you quite well!

So, what is the movie about? Well, what is it not about? Infidelity. Obsession. Materialism. Debauchery. Alcohol. Lies. Ambition. Derangement. Violence. A blinking green light that probably made a better literary device in the book than it does in the movie. Yeah, The Great Gatsby is a complicated and emotional tale, even with so much glitter and alcohol-fueled benders in Luhrmann’s interpretation, not to mention all of that flashy 3D, if you opted for the 3D cut. Even with the overload of style, the movie’s substance, while done better in prior film adaptations, and of course in the novel, is not completely sacrificed by any stretch, even in a more audience-friendly version of the story. Mind you, this is still clearly a movie meant for adults, even with the PG-13 rating, and it makes sure to continue adhering to the highly interpretive and emotionally volatile stakes in the original source material, making it a welcome Summer blockbuster with more substance than most, if you’re into that.

The movie begins with fledgling bond salesman, Nick Carraway (played by Tobey Maguire) living next door to the extravagant and wealthy mansion of one Jay Gatsby (played by Leonardo DiCaprio), a man who holds wild high society parties every weekend, but whom most no one has even seen. After being the lone person to receive an invitation, whereas everyone else just shows up at Gatsby’s estate, uninvited for each party, Nick eventually meets the man and learns that he once had a love affair with Nick’s cousin, Daisy Buchanan (played by Carey Mulligan). Daisy is now married to Tom Buchanan (played by Joel Edgerton), an old college acquaintance of Nick’s who happens to be unfaithful, engaging in an extra-marital affair with a lower-class housewife, Myrtle Wilson (played by Isla Fisher). When Nick arranges a reunion for Gatsby and Daisy, the result is a big tangled web of sex, lies, and a whole lot of booze and partying.

As usual with Luhrmann’s movies, the cast in The Great Gatsby is incredible! Tobey Maguire and Leonardo DiCaprio perfectly portray their respective pivotal characters, made all the better that they’ve been friends in real life since they were children. This gives them outstanding narrative chemistry as Nick and Gatsby, with their friendship defying its seemingly random, fantastical foundation to feel surprisingly wholesome and heartfelt. This remains true even when the movie starts tapping upon the question of whether Gatsby is delusional and obsessed with his clinging to his past affair with Daisy, which is one of the movie’s key story arcs. The charm of Gatsby’s character is infectious and tempting however, even for the audience, making DiCaprio’s portrayal compelling and transcendent, consistently keeping the movie interesting, even during soft-spoken dialogue. 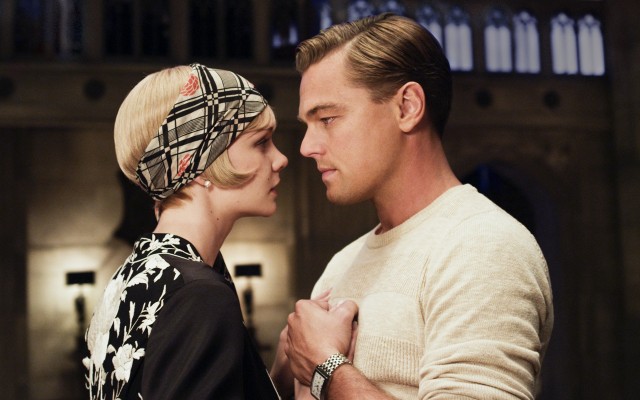 The supporting characters are equally compelling. The quiet grace of Carey Mulligan works extremely well with the aggressive performance of Joel Edgerton, perfectly selling the emotional conviction of both characters, particularly when things inevitably get messy with their outwardly perfect 1920’s upper-class marriage later in the movie. If there’s one performer that you’ll wish had more screentime though, it’s Isla Fisher, who makes Myrtle a truly biting, aggressive and sexy woman, making her stand out, even when playing a character that mainly serves as a plot device to move along the story when necessary, and little else. Considering that most of Fisher’s resume is silly, light-hearted comedies like Hot Rod and Wedding Crashers, she proves that her talents can be equally serviceable in a more serious movie, but one that still allows her to be a charismatic, alluring and vaguely kooky character. Myrtle, like the other key women in the movie, is very glamourous and beautiful in a very abstract, 1920’s way, which may irk realists in all fairness, since she looks indistinguishable from the rich, upper-class flapper women, despite living in a dirty coal pit. It’s true, it doesn’t make any sense, particularly when her husband is a greasy, unkempt mechanic that’s more consistent with how you would imagine this part of 1920’s society. Still, chalk it up to Luhrmann’s artistic license I suppose. I doubt male viewers will complain anyhow, since Myrtle is easily the sexiest character in the movie, if that’s what you’re going for.

The cast and the story add the necessary substance to this latest movie adaptation of The Great Gatsby, so open-minded fans of the book should still be satisfied here, but it’s no secret that this is a movie heavily marketing itself on style as well. To that end, it also performs very well. The entire movie is very stylish and eye-catching, creating a very fantastical view of 1920’s New York. Everything is very bright. Everything is very flashy. Everything is very energetic. The entire movie has been made with this clear sense of artistic passion, which will suck you into the setting rather effortlessly. Even if some stuffier literary purists may dismiss them as filler, most audiences will also enjoy the various scenes depicting Gatsby’s parties as well, easily a visual highlight on every count. The Gatsby parties are extremely busy and ornate, with glitter cannons, flapper dance sequences, and all other manner of ostentatious craziness going on to an almost unbelievable extent! Yes, the Jay-Z-laden soundtrack will distract realists, again, since it’s modern music in a very retro setting. You might be surprised that it works better than you would think however. Luhrmann has a bizarre talent for adding modern media to vintage period pieces, and somehow making it work. The Great Gatsby is no exception. It’s certainly not a musical like Moulin Rouge! was, but it has a very, very similar sense of style, to the point where some of the scenes are shot in almost exactly the same way in The Great Gatsby. If you found Moulin Rouge! too obnoxious, ridiculous and self-indulgent, you’ll also be happy that The Great Gatsby is a little more reserved and dignified with its party scenes, albeit just barely. 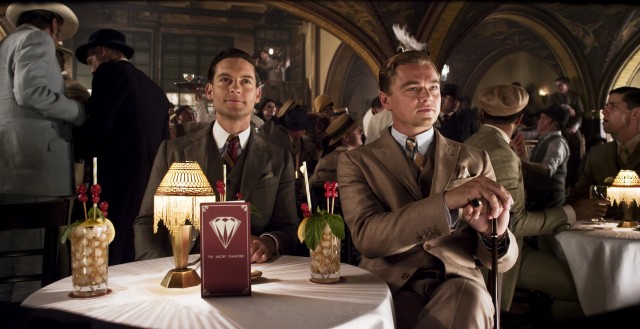 Of course, this leads into the question of the 3D, another big visual hook in Luhrmann’s adaptation. Luhrmann’s directing style would be thought to be a natural fit for a 3D presentation, since everything is about being bombastic and colourful in most of his best beloved movies. You’d never imagine that The Great Gatsby would make sense as a 3D movie, but you would be surprised, since it proves that 3D can deftly enhance even movies you wouldn’t imagine would support it, so long as it’s well-directed to that end. The Great Gatsby is definitely a strong 3D movie, and Luhrmann easily demonstrates a lot of talent with the 3D medium. The 3D adds an incredible sense of atmosphere, enhancing just about every artistic visual effect in the entire piece, whether it’s flying curtains, dropping glitter, or even just the motions of a dancing shot. It may ultimately be window dressing, but the 3D presentation will pull audiences into the movie even more effectively, since it makes everything seem so much more lifelike and gripping than if you just watched the movie in regular 2D. Watching The Great Gatsby in 3D is something I heavily recommend, since you’ll definitely get the most out of the movie that way!

The Great Gatsby is definitely a movie that will exceed expectations for many, but there are some passing issues with Luhrmann’s latest here and there as well. I’ve already mentioned that the artistic license might get in the way of the realism for some viewers, especially with characters like Myrtle, but one must also remember just what the movie is trying to adapt. Even with all of the partying and booze, this is still a very dramatic, dialogue-heavy piece, with most of its lengthy 143-minute runtime consisting of scenes where people just talk, and talk, and talk. If you enjoy dialogue-heavy movies, it’s not an issue, but if you’re expecting constant noise and partying, you won’t really get that here, as much as the trailers tried to play that aspect up. The movie is very methodical with how it spaces out its more stylized, party-driven scenes, so they hit with maximum effect when they do come, but they also might come less often than you’d imagine.

Some may also feel that Luhrmann’s aggressive sense of style is of a higher priority than actually capturing the heart and essence of the source material in its complete form. Granted, the movie still packs plenty of substance, but it is true that certain pivotal and emotional scenes from the book are glossed over and swept under the rug at times, most notably Tom and Myrtle’s turbulent, vaguely abusive affair, which is almost entirely ignored beyond the occasional reminder that it’s happening, along with one inciding incident early in the movie. The movie may be dialogue-heavy, but it’s also very set-heavy. Luhrmann clearly loves the world he’s created more than the story, which makes for many engrossing set pieces, but some fans of the book may be disappointed to find that certain scenes of the story seem glanced at, then just swept aside in favour of more atmosphere or style. The eye-catching presentation certainly makes the movie easy to watch, but it is difficult to deny that the story does occasionally get chopped in favour of the set pieces at times. 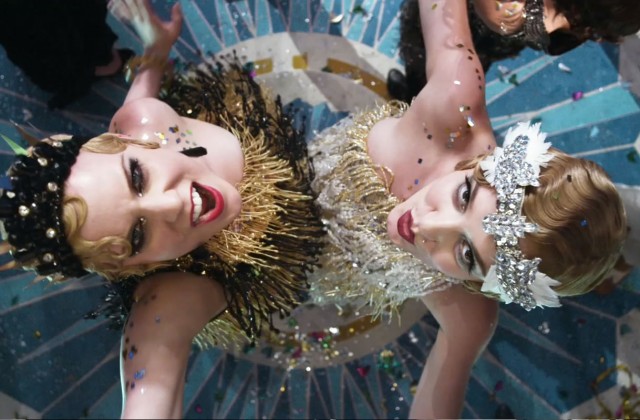 All things considered however, this is a very successful adaptation, which separates itself from the movie adaptations of The Great Gatsby before it, thanks to its bold sense of style. Even with some controversial directing decisions, everything holds up quite well, and while the style is still the highest priority here, it certainly isn’t in any way a butchering of the source material, which it’s actually extremely faithful to in terms of progression. Some story scenes may be rushed through or glossed over in favour of the set pieces, but the movie is still a smarter and more memorable blockbuster than most, even if you probably wouldn’t call it the best adaptation of the source material to date. In several respects, the earlier 1974 movie is a superior cinematic telling of the story, one likely more worthy of Academy Awards and the like, but the 2013 movie is probably the most digestible version of the story in existence to date.

It’s doubtful that this latest cinematic rendition of The Great Gatsby will be a big winner at the next Academy Awards (though it could be nominated for a few things), even with its stellar cast and outstanding production values, but one can definitely say it’s the most entertaining way to experience this particular story. It’s an ambitious oddball Summer blockbuster that’s probably better than you’d think, and open-minded moviegoers should most certainly check it out, and in 3D at that.

Mr. Luhrmann has truly defied expectations with his latest, and to that I say, “Well done, old sport!”