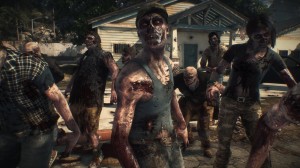 It looks like at least one of those frequent rumours we reported on has been confirmed true! Capcom’s promised ‘surprise’ was revealed during Microsoft’s E3 2013 press briefing, and it’s none other than Dead Rising 3! Not only is the game being made for next-gen hardware, but it will even be exclusive to Xbox One as well! Even better, it will be a launch title for Microsoft’s upcoming next-gen console, expected to release this November!

A lengthy gameplay demo was shown during Microsoft’s keynote, demonstrating how the enhanced power of the Xbox One allows for a much larger world, populated by many, many more flesh-eating zombies! The player character is confirmed to be one Nick Ramos, a mechanic living in the fictional California city, Los Perdidos; Overrun by zombies, naturally. 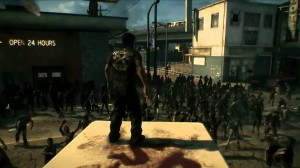 While Nick doesn’t currently seem to have the resourcefulness of Frank West or Chuck Greene, if the trailer is any indication, Capcom has promised that the weapon-crafting system from Dead Rising 2 will be making a comeback. Nick mainly stuck to the same old simplistic blunt objects for most of the gameplay demonstration, but one nifty trick was shown regardless; The ability to exploit Xbox SmartGlass to call in air strikes with your mobile device!

Dead Rising 3 is being developed by fledgling studio, Capcom Vancouver, who were known as ‘Blue Castle Games’ when they developed 2010’s well-received Dead Rising 2. They have promised that the open-world setting will be completely seamless, and devoid of load times. This is quite ambitious, considering how busy and detailed the game world appears to be! The demo seemed to support this fact however, as there was nary a hitch, nor a stutter during gameplay.

Xbox gamers won’t have long to wait to see just how well Dead Rising 3 leads Capcom’s charge into next-gen technology, when the game launches exclusively for Xbox One this Holiday. For any news on Dead Rising 3, as it surfaces, don’t forget to keep shambling back to Eggplante!