Microsoft had a highly lengthy, busy E3 keynote this year! Of the numerous new IP’s they announced for Xbox One however, one was good enough to even make an appearance during the Xbox One’s reveal presentation in May! This was Alan Wake developer, Remedy’s new Xbox One game, Quantum Break.

Sure enough, Remedy appeared briefly on stage to chat up the game during Microsoft’s conference. Re-affirming that it will have an accompanying television series, in an attempt to bridge the gap between video games and television, Remedy teased a few additional details about what players can expect, even if it was mainly conceptual. Exact gameplay details still remain a secret. 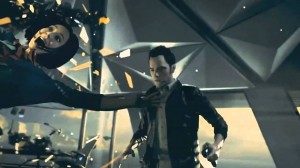 The game’s premise is confirmed to result from a science experiment that went horribly awry. This experiment has left the space-time continuum fractured, unstable, and most importantly, able to be manipulated to a degree. The lead protagonist demonstrates this by pulling a woman out of a frozen explosion, resuming time for her as long as he has held on to her. They have a limited amount of time to get what they came for and leave, before time resumes, and the explosion engulfs all of them.

Even with no definitive gameplay details confirmed, the possibilities of Quantum Break’s premise are absolutely massive, for both a video game and a television series! The game will likely be another story-driven adventure game akin to Alan Wake, but it seems that it’s not far enough along in development to discuss such details at this point. It’s too bad, because we’re extremely eager to see just how this premise can be interwoven with revolutionary next-gen gameplay!

Quantum Break will be released exclusively for Xbox One at some point in the future. The game will not be a launch title, and is expected to release in 2014 at the absolute earliest, likely when the planned accompanying television series has a more concrete schedule. Even so, we at Eggplante will be plucking details about Quantum Break, as they develop!