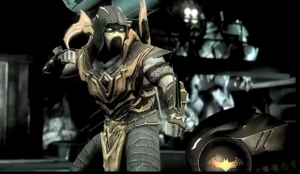 If you weren’t satisfied with the four DLC character selections that developer, NetherRealm Studios offered in Injustice: Gods Among Us, don’t lose hope! Some fan-favourite characters that have yet to join the roster may still be on offer in the near future!

In a reply to a Twitter post, NetherRealm Studios director, Ed Boon gave a not-so-subtle, highly emphatic “YES!” when asked by a fan if more DLC characters were being planned for the developer’s recent DC-themed fighter. This seems to contradict previous indications that Injustice would only feature four additional DLC fighters. This speculation was further supported by the fact that NetherRealm’s 2011 Mortal Kombat reboot featured four DLC fighters, total.

Warner Bros. hasn’t currently issued a statement confirming any new DLC characters for Injustice at this point. Still, we have to say that Boon doesn’t gain anything by lying. Could he have changed his mind about excluding highly-requested characters from the Injustice roster? We suppose that we’ll know soon enough!

At this point, players can download four bonus DLC fighters: Snarky mercenary, Lobo, Bruce Wayne sidekick, Batgirl, Fan-favourite Mortal Kombat spectre, Scorpion, and Superman’s deadliest Kryptonian adversary, General Zod. The characters are $5 individually, but can all be purchased for free if players buy a $15 Season Pass. Currently however, the DLC fighters are only available in the Xbox 360 and PlayStation 3 editions of Injustice. All of them will be made available in the Wii U edition later this Summer however, according to NetherRealm.

Are there still DC characters that you want to see in Injustice? Personally, we’re still crossing our fingers for the likes of Martian Manhunter, Black Canary and Plastic Man. Who else would you like to join the ranks of the highly successful DC brawler? Do you think that any more DLC characters should be offered, or are you satisfied with the current four?

Leave your thoughts in the comments below, and don’t forget to keep your Watchtower on Eggplante for all Injustice news, as it develops!