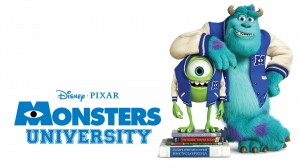 Ever since 2010’s stellar Toy Story 3, legendary animation studio, Pixar has stumbled with their successive offerings.

2011’s Cars 2 was widely panned by critics and audiences for being a pandering, sell-out effort. Mind you, this was before Disney announced this Summer’s upcoming Cars spin-off and true sell-out effort, Planes.

A year later, 2012’s Brave was accused of being watered-down and shallow compared to the studio’s prior works. That was also before the butt end of a controversy about its main character being potentially gay, and then too prettied-up and sexualized when she actually was inducted into the Disney Princess ranks. Yeah, I don’t get that whole hullabaloo myself, in either direction.

Regardless, we now have Pixar’s latest, Monsters University, the studio’s first prequel movie. Preceding the events of 2001’s widely-adored Monsters Inc., Monsters University is all about how the 2001 movie’s protagonists, Mike Wazowski and James P. Sullivan, met and became friends during their academic careers. Of course, they weren’t always friends. For most of this movie, they’re actually rivals with very different ideas of how to get ahead in the scaring business.

Now, right away, you might be thinking that you know the plot of this movie already. Mike and Sully will start out enemies, then become buddies when they’re forced to work together. They then somehow save the day and secure their graduations and scaring careers, as college movie cliches would dictate. In fact, University seems to actively play to your expectations in that respect, or at least, the expectations of the adults. I doubt that the kids in the audience would have seen many college movies by this point. Just saying.

And then however, it surprises you. Despite initially appearing predictable, University actually doesn’t turn out the way that you would think! It’s a much more creative movie than you would imagine because of this, and as another Pixar follow-up effort that isn’t a Toy Story movie, you may not expect much going in, but you will certainly be pleasantly surprised. Sure, University doesn’t recapture the ‘instant classic hot streak’ that Pixar maintained throughout most of the 2000’s, but it’s definitely an improvement over the prior two Pixar movies, and is most certainly a pleasant and charming movie that is well worth watching!

Billy Crystal and John Goodman reprise their roles as Mike and Sully respectively, and Steve Buscemi even returns to the role of Monsters Inc. antagonist, Randall, back when he’s called ‘Randy’ and is kind of a nerd. It’s cuter than you would think. Anyhow, these three are virtually the only actors returning from the first movie, and I do have to say that the presence of Boo is sorely missed in terms of the character dynamic. The misfit fraternity brothers that Mike and Sully join up with aren’t exactly terrible replacements, but they’re not nearly as relentlessly adorable as Boo is. Still, be on the lookout for some funny cameos from Monsters Inc.’s supporting cast!

The new conflict of the movie arises when Mike and Sully run afoul of the frightening dean of the university, Abigail Hardscrabble, a centipede-like monstrosity voiced by Helen Mirren. After he and Sully are kicked out of the scare program, Mike negotiates a wager with Hardscrabble that he compete with a fraternity in the Scare Games, and if he win, he, and his team, would be allowed back into the program. Initially short a contender, Sully joins the team out of desperation, even if he’s not exactly thrilled to be working with Mike. 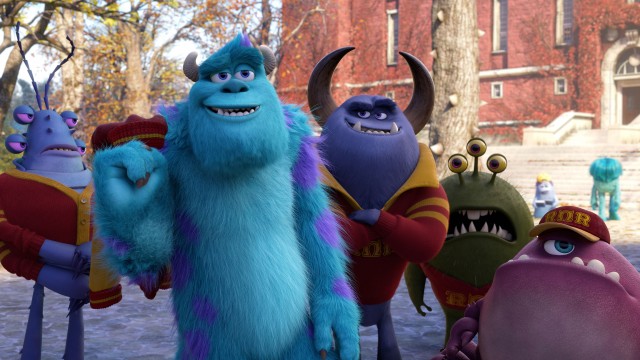 Again though, as potentially predictable as this sounds, University doesn’t go for the low-hanging fruit. It makes you think that it will, but it doesn’t. The movie’s story is actually surprisingly mature, and yet, uplifting. Its climax and final act take a complete detour from the predictable progression it had been ok with up until that point, but to a very effective end. This will definitely please adults, who will get more than they expected from what appears to be such a play-it-safe, kid-friendly movie on paper.

Of course, while much of the story’s finer events, specifically, all of the college stuff, will likely go over kids’ heads, that’s not to say that children can’t enjoy University. On the contrary. The movie is full of colourful visuals, memorable characters and even some well-executed cartoon slapstick in several scenes. It’s a very eye-catching and highly charming movie, one that will put a smile on kids’ faces as much as adults’, even if kids likely won’t be able to grasp what’s going on nearly as much as older audiences who have actually been to college and/or university can.

On the note of the animation, which is superbly-done as usual for Pixar by the way, I did see University in 3D, and it was… not awesome, but good enough. Pixar only seems to make 3D cuts of their movies because every animated movie has to be in 3D now, and as a result, most of their 3D cuts have been very bland. Ironically, the much-hated Cars 2 is the closest that the studio has come to releasing a strong 3D movie, with most of the others just not really doing anything useful with their 3D presentations. 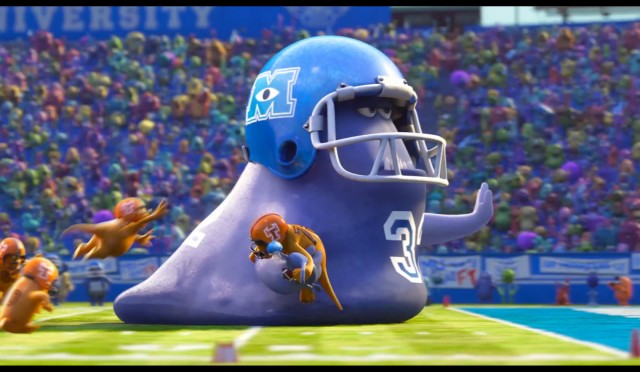 University meanwhile does a little more with the 3D, even if it’s still hardly on the level of the superb 3D jobs that competitors, Dreamworks Animation, Blue Sky Studios and Illumination Entertainment tend to pull off. If you’d rather just watch the movie in plain old 2D, or have kids that are too young for 3D movies, you’re not really missing a whole lot by just watching University flat. Of course, if you do enjoy 3D movies, then you’ll find that a small handful of the more cartoon-y scenes do indeed benefit from the 3D presentation, however slightly. Whether to watch this in 2D or 3D essentially comes down to personal preference, in other words.

Either way though, the best thing about University is that it’s just so loveable, for audiences of all ages. It doesn’t feel like a hollow cash-grab like Cars 2 did, and it doesn’t feel like an obviously-compromised vision, like Brave did. It’s a movie that really feels like it’s achieved its full potential, as a surprisingly intelligent existential commentary for adults, and as a breezy, colourful amusement for children. For Pixar’s first prequel, it actually turned out astonishingly well, even if it’s still certainly not the studio’s best work.

I suppose that the proper term for a movie like this would be a ‘crowd-pleaser’. University isn’t perfect by any means. It seems to have trouble picking a central villain, it’s difficult to argue that the character dynamics are compromised with some of Monsters Inc.’s missing personalities, and before the strong third act and finale, it is occasionally kind of predictable. Despite some of its drawbacks however, the movie is incredibly difficult to dislike. It’s very friendly, upbeat, colourful and inspiring, being ultimately more surprising and creative than many adult audiences would expect as well, even when the conclusion comes as something of a curveball.

Yes, Monsters Inc. is a better movie than University, as is the majority of Pixar’s prior works from the past decade. With that said however, University is a pleasant surprise and something of a return to form for Pixar. They’re not quite where they were between 2007 and 2010, but they’re getting there. Disappointingly, the studio’s apparent next project, 2014’s The Good Dinosaur, doesn’t get a preview teaser before this movie, as per Pixar tradition. Hopefully however, it continues the studio’s more positive momentum that they’ve found here.

Actually, speaking of Pixar tradition, University is preceded by a Pixar short film, as expected. In this case, it’s an adorable little piece called The Blue Umbrella. As with its predecessors, the movie is a silent animated short, and is a romantic tale of the titular Blue Umbrella pursuing true love. Trust me, it makes sense when you see it. It’s an excellent short, and a fantastic treat to behold before seeing the main feature! In fact, this short alone may be the best reason to see University in 3D, as The Blue Umbrella actually does take effective advantage of its 3D presentation, making an already very striking animated short all the more immersive and beautiful!

University likely won’t live on as a top Pixar classic, but for now, you’ll be very satisfied for your ticket money. The movie is very loveable and fun for both kids and adults, not quite surpassing Monsters Inc., but still managing to be a worthy follow-up effort, against all odds. If you love animated movies, Monsters Inc., Pixar, 3D movies, or just great movies in general, you should definitely see this one. It’s great, digestible fun that will probably exceed your expectations to at least a fair degree, and, if you do have young children, they’ll be just as entertained as you.

It’s hard not to miss Boo just a little, though…