Excited for Capcom and WayForward’s high-definition remake of DuckTales on the NES? We know we are! We finally know when we’ll get to play the game as well! DuckTales: Remastered is releasing on August 13th! Well, three of its four versions anyway. The Xbox Live Arcade version is being delayed all the way to September 11th, with no reason given by Capcom or WayForward. Sorry, Xbox gamers.

We speculate this to be the case because DuckTales: Remastered was denied a spot in Microsoft’s 2013 Summer of Arcade lineup, and had to be pushed back to avoid conflicting with the promotion. It’s bad reasoning, yes, but we suppose that Xbox Live Arcade will be blessed with four other big digital offerings during that time anyway.

What’s even more interesting however is that DuckTales: Remastered is actually receiving a retail package!… But only on PlayStation 3. Why only on PlayStation 3? We have no idea. Still, specialist collectors who happen to own Sony’s console might want to take note of this. The retail package is slightly more expensive, at $19.99, likely for the cost of packaging. No specific perks have been revealed for the retail edition versus its cheaper digital counterpart as of yet.

For those unfamiliar, DuckTales is one of the most celebrated licensed video games of the 8-bit era, a time when licensed video games were just about consistently terrible. It’s a side-scrolling platformer that allows you to play as Scrooge McDuck, on a quest to out-perform his rival, Flintheart Glomgold in the noble quest of making himself even richer. Players use their cane as a weapon, and could even use it as a pogo stick! DuckTales’ positive reception led to it being ported to the Game Boy a year later, and releasing an NES sequel, DuckTales 2, a couple of years after that.

The remake promises to add in new story elements (included the much-demanded explanation of how Scrooge McDuck can breathe on the moon!), redesigned boss patterns, and all-new voice acting from the original Disney cartoon’s actors, including Alan Young returning to voice Scrooge himself! The graphics have been enhanced for high-definition and 2.5D animation, and it certainly appears that the remake plays as great as it looks, if the previews are any indication!

DuckTales: Remastered is releasing for $14.99, on Steam, the PS3’s PlayStation Store, the Wii U eShop, and later on Xbox Live Arcade. The PS3-exclusive retail package is also currently available for preorder. We’ll be delivering a full review of the game in August, and until then, we will be bringing you all of your DuckTales news, and trying to get that theme song out of our heads all the while! 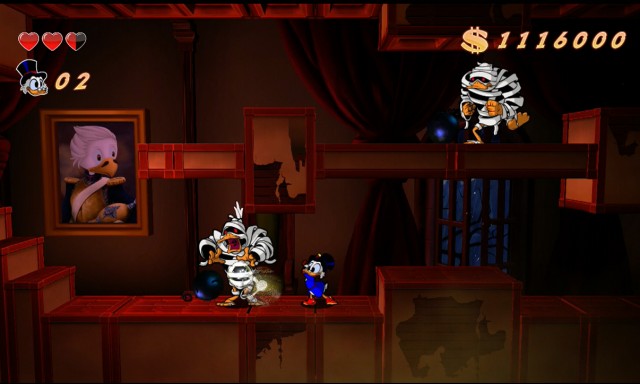