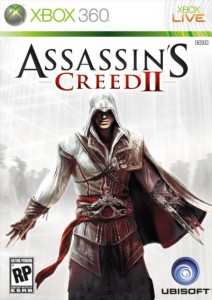 Following Microsoft’s rather lacklustre showing for the beginning of the month with their Games with Gold program, they’ve decided to make Assassin’s Creed II the next title available for their program.

Games with Gold is a free service that lets Xbox Live Gold members download two games per month, completely free of charge, to their Xbox 360. It’s intended to compete with PlayStation Plus, a $50 per year service that gives gamers what Sony calls an “Instant Game Collection”.

We’re still much bigger fans of Sony’s offering, given that, this month alone, we downloaded Uncharted 3: Drake’s Deception, LittleBigPlanet Karting, Battlefield 3, and Saints Row: The Third, all for free. Microsoft, you need to step up your game.

Major Nelson notes that there are a lot of other sales going on in the Assassin’s Creed universe on Xbox Live this week, as well as some decent sales on games in the coming weeks. Regardless, we’ll need to see more from Microsoft for them to really convince us that they’re trying with Games with Gold.

At this point, it might’ve been better if they didn’t offer anything.