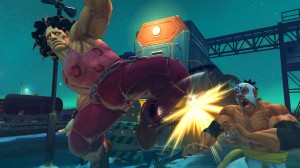 Yeah, it seems like Capcom is just running with the joke now.

If you’re a fighting game fan, then hopefully you paid attention to this past weekend’s EVO 2013 tournament! Not only was it full of electrifying matches within the best recent fighting games, but it’s also seen a few tantalizing news bits as well! After NetherRealm’s announcement of Martian Manhunter and a John Stewart skin soon being downloadable for Injustice: Gods Among Us, it seems that Capcom has now chosen the occasion to make a big announcement of their own!

After the bouts of Super Street Fighter IV: Arcade Edition were decided at the tournament, Capcom confirmed that their fan-favourite fighter will be receiving yet another re-release! Officially dubbed Ultra Street Fighter IV, the latest revision comes packing five new characters; Final Fight’s Hugo, Poison and Rolento, Street Fighter III’s Elena, and a fifth character that remains unidentified. Capcom has teased that this mystery character has never been seen in a Street Fighter game before however!

Aside from these new characters, Ultra Street Fighter IV is rebalancing its established fighters based on fan feedback. Six all-new fighting arenas are also being added to the game, along with every DLC costume released in the prior revisions for those who spend the $40 asking price on a physical copy. If you’d rather just upgrade from a previous edition of Street Fighter IV however, you can just spend $15 to add the new characters, stages and rebalancing, without the DLC.

Ultra Street Fighter IV will be available for Xbox 360, PlayStation 3 and PC early next year. While Xbox 360 and PlayStation 3 players will have the option of purchasing the physical package, it appears that the PC version is only being released digitally on Steam.

Be sure to keep lightning-kicking your way back to Eggplante for all of your Street Fighter news, as it’s declared!