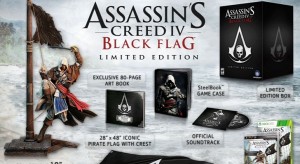 Who doesn’t love a a limited edition game bundle, especially one full of awesome collectables? Ubisoft has announced their latest bundle for the much-anticipated Assassin’s Creed IV: Black Flag is now available for pre-order. Fans of the Assassin’s Creed series will not be disappointed!

So you might be wondering, what’s inside?  In addition to the game, this Limited Edition features a gorgeous 18″ statue of Captain Edward Kenway, an embroidered 28″ x 48″ Assassin’s Creed pirate flag, an exclusive 80-page art book, a SteelBook case and the full game soundtrack.  Not too shabby!

Ubisoft has always made sure to offer elaborate bundles for the greatest of fans and this one really shows. Priced at $129.99, this Limited Edition will be available alongside the standard edition on October 29 for the PlayStation 3 and Xbox 360.

Are you thinking of grabbing the Black Flag Limited Edition?  What would you like to see in future bundles? Let us know in the comments below!