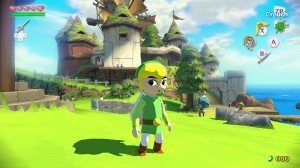 Nintendo hosted another Direct conference this morning (check out Brent’s full roundup here), and while the video didn’t announce anything new, we got plenty of details on the upcoming Zelda titles, The Wind Waker HD and A Link Between Worlds. Of course, Eiji Aonuma, producer for the series since the late-nineties, has provided the gaming world with more details about the soon-to-be-released games.

For The Wind Waker HD, due out in October, Mr. Aonuma says the new Swift Sail will allow your ship to go faster. We’ve known this since E3, but he says that “not only will this sail make the ship go faster, but it will always be full of wind, meaning you’re now able to control the ship to any direction you want, without having to use the Wind Waker to change direction of the wind.”

Apparently this, coupled with the GamePad map that “works like a car nav”, will make it much easier to traverse the islands of the seas. Mr. Aonuma hopes that “you’ll have a blast exploring the great sea once more,” even if you struggled with it the first time around.

On the 3DS front, referring to A Link Between Worlds, of course, Mr. Aonuma shared some details about both the dark world and the shops in the game. 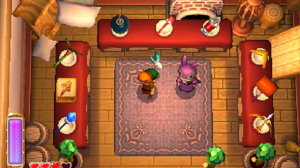 The dark world is entered to by becoming drawn Link and attaching yourself to a wall, then slipping between what we can only assume is an inter-dimensional crack in a cliff or rock face. There is also said to be a kingdom in the other world, not unlike Hyrule Castle and the guards that secure it. He says “the story will revolve around the events that will unfold in that kingdom, and I think you’ll have fun experiencing the game’s distinctive world that is like no other in the series.”

We were also treated to a new screenshot, one that depicts the new shop in the game. In this shop, Mr. Aonuma mentions, the keeper offers up items like the bow and arrow and boomerang for sale. He is quick to note that shops in Zelda titles have never carried items that don’t need replenishing, opting only for consumable items such as bombs and magic powder.

This means that, in at least one place in the game, Link will lose his items or they will be taken from him in battle. We must also assume that these items have pretty high prices and that they’re only available for purchase once you’ve earned the item in a dungeon in the game. Of course, Mr. Aonuma didn’t explain much more, just saying, “I hope you’ll use your imagination wondering what this shop is all about.” What a tease.

Mr. Aonuma unleashed all these comments on Miiverse, so of course, you can see them all for yourself at the community page for The Legend of Zelda.