With whole, singular licensing sales becoming more and more common in the video game space in recent years, beloved toy maker, Hasbro has announced that they in turn are partnering with a single game company to publish all of their brands in the virtual space. That company is none other than mega-publisher, Ubisoft, one of the most recognized and successful family-driven publishers in the world, even if the company also maintains plenty of mature core gamer franchises as well.

This gives Ubisoft full claim to the likes of various Hasbro gaming brands, which is to say at least the many board games that Hasbro provides. For those unaware, Hasbro is the largest board game producer in the entire world, having full ownership of various well-known board game makers, including Parker Brothers, Milton Bradley and Wizards of the Coast.

Needless to say, this partnership will likely pay out gangbusters for Ubisoft, who will have cornered a huge chunk of the family video game market now! The French publisher, which has developer subsidiaries all throughout Canada, Europe and Asia, is coming off of a financial loss for the second quarter of 2013. This is despite the critical acclaim and strong sales of Far Cry 3: Blood Dragon, their lone high-profile game release for Q2, even if it was a digital download game.

Ubisoft plans to return to profitability later in the year with a very busy and highly anticipated lineup of games before the end of 2013. These include: Splinter Cell: Blacklist, Rayman Legends, Assassin’s Creed IV: Black Flag, Watch Dogs, and South Park: The Stick of Truth, among others. 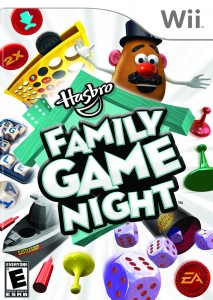 Specifically named in the partnership are board game properties: Monopoly, Scrabble, Trivial Pursuit, Risk, Battleship and Cranium. These, presumably among other Hasbro game brands, will be exclusively published in the video game space by Ubisoft now, who will handle publishing duties not just on current-gen platforms, but also next-gen platforms as well!

Previously, Hasbro self-published video game adaptations of some of these board games, and has also frequently worked with EA on the Hasbro Family Game Night compilations, which were made available on all current platforms, but were especially successful on Nintendo’s Wii console.

The press release doesn’t appear to address Hasbro’s toy lines however, most notably those with high-profile fanbases such as G.I. Joe and Transformers. The Transformers game rights still appear to be held by Activision for the time being, who have not only adapted Michael Bay’s Transformers movies to the video game space, but also the Cybertron subseries of Transformers games. The two Cybertron games have generated solid fan acclaim and sales, also detailing the canonical downfall of the titular Robots in Disguise’s home planet, decades after the toys were invented and the subsequent cartoons had come and gone.

Activision also produced the video game adaptation of last year’s Hasbro-licensed action blockbuster movie, Battleship, while the G.I. Joe: Rise of Cobra game tie-in was published by EA. Whether or not Ubisoft will also claim publishing rights to video games based off of Hasbro toys (and the movies and other media they inspire) as well as board games remains to be seen.

Do you play video game adaptations of board games? Do you think that Hasbro will become a staple in the Ubisoft portfolio, just as EA has quickly made Star Wars a staple of their own game catalogue? Leave your comments below…

Here’s hoping that this partnership can help get Ubisoft back in the black all the quicker before 2014!