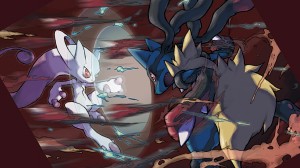 With Pokémon X and Pokémon Y nearly here it’s about time we release some fresh news, today we’re focusing on the rumoured Mega Evolutions. So what are Mega Evolutions exactly? Just as they sound, actually, giving a select few new and existing Pokémon the ability to evolve into some stunning forms.

Pokémon like Mewtwo, Lucario and Blaziken all have the ability to mega-evolve, but only with the help of the Mega Stone. Unlike your usual evolution, Mega Evolutions only last for the duration of the battle and serve more as a boost, perfect for those particularly difficult battles.

It’s still unknown whether the Mega Stone is a temporary item, but considering the sheer power it can wield, I can only imagine how rare and sought after they must be.

For instance, the only way to get the mega-evolved form of Blaziken, will be through a special distribution event via Nintendo Network during the game’s launch.  For a limited time you’ll have the chance to get a Torchic holding the Blazikenite Mega Stone, meaning there’s a specific Mega Stone for each Pokémon. It’s still unknown how you’ll be able to find the other Stones.

While I’m not particularly interested in the evolutions themselves (MegaMewtwo, really?), I am intrigued by the idea of temporary evolutions for that extra boost. Attribute boosts are nothing new in the series, but for Game Freak to offer a change in physical appearance and, most likely, move sets is very exciting, to say the least. Much of the idea is still in shadows, but it’s a feature I’m hoping we’ll learn more about very soon.

The new games will feature another new way to boost skills, this time in “super training.” Super training allows you to increase an individual Pokémon’s base stats by playing mini-games. There will also be core training workouts that will allow your Pokémon to increase their stats on their own.  It’s still unknown how these workouts will compare to, say, EV Training, so stay tuned for more news.

If that weren’t enough, Nintendo has also revealed three new Pokémon, Dedenne, Bunnelby and Skiddo along with a new roller skating gym leader, Korrina of Shalour City, who may hold the key to Mega Evolutions.

Pokémon X and Pokémon Y will be released on October 12 for the Nintendo 3DS. So what are you thoughts on Mega Evolutions? Is this a feature you’re interested in learning more about or are you more interested in the new cities and Pokémon? Let us know in the comments below!